On 10 March 2021, Navdanya International organised a webinar – GMOs are a failed technology, The Future is GMO Free.

This panel of civil society leaders and experts lent their perspectives their attempted impositions from all over the world and the struggles and victories against GMOs and the Industrial Agricultural System they are a part of. Referring to the way old and new GMOs are being pushed, Vandana Shiva explains, “We have a convergence of big tech, big biotech, big ag, big pharma, and big media. The rush to push GMOs is an agenda to go towards deregulation and patenting. What we are living through is an attempt to destroy knowledge and biodiversity irreversibly.”

Over the last decades, this has resulted in the aggressive push for the adoption of failed GMOs, including Golden Rice, and BT Brinjal (Eggplant). But despite the known failures, and the negative health and environmental effects of these GMOs, the industrial agriculture lobby has now started to push for the second generation of GMOs or New Breeding Techniques (NBTs), including gene editing. Both of which just stand as a marketing term for a variety of risky new techniques of genetic manipulation. These impositions are usually funded and pushed by the private market interests of philanthrocapitalists, most principally the Bill and Melinda Gates Foundation.

The online conference was moderated by Ruchi Shroff, Director of Navdanya International. She explains that over the last decades, GMO crops were imposed in countries all over the world, advertised as a solution to food insecurity and the malnutrition crisis. “The use of these GMOs has brought more harm than good, contributing to a series of exponential environmental degradations while marginalizing and destroying traditional farmer knowledge and biodiversity. For decades now, citizen and farmer-led movements from all around the world have been pushing governments to strictly regulate or ban GMOs. But despite the repeated efforts of international institutions, corporations, research centres, and governments to impose these technologies, oppositions in Italy, Peru, Mexico, the Philippines, Bangladesh or India show a possible path to resistance.”

Chito Medina, a founding member of MASIPAG (Farmers-Scientists Partnership For Development), and former National Coordinator of the network, now Associate Professor of Environmental Science in a leading university in the Philippines,  tells us about the corporate push for GMOs and specifically golden rice in the Philippines. After several versions were developed to improve its composition, golden rice was designed as safe in December 2019 by the Philippine Bureau of Plant Industry, and it still has to be approved for commercial sale. However, the claim that golden rice will cure vitamin A deficiency remains unproven to this day. In 2018, the FDA stated that golden rice offers no nutritional benefits and does not provide sufficient vitamin A levels to warrant a health claim. Besides, many other biodiverse food sources and wild plants have a much higher level of beta-carotene than golden rice. Genetically modified rice is a distraction from the root causes of poverty and real, biodiversity-based methods of improving nutrition. The real reason golden rice is pushed so hard is to soften resistance against GMOs and lead to the control of seed, agriculture, and food by Biotech companies. Consumers and local groups have mobilized, and they need to take legal action to oppose the release and commercialization of golden rice in the Philippines. (The speaker’s presentation slides can be found at this LINK).

Farida Akhter, founding Executive Director of UBINIG, Bangladesh, tells us about the failures of Bt Brinjal and the corporate lies behind its imposition. Bt brinjal is a genetically modified brinjal (or eggplant) created to be resistant to insects. After the failure to impose it in India in 2009, the testing ground for Bt Brinjal became Bangladesh, where it was approved for commercial release in 2013.  Despite protests from international scientists and environmentalists, the process to approve Bt Brinjal was unusually quick, which represented an “unprecedented health hazard to the population of Bangladesh because there had not been adequate safety testing for human consumption”. Farmers were given false hope about the benefits of planting Bt Brinjal, demonstrating a blatant disregard for local knowledge and causing huge losses for farmers who earned more with traditional, local varieties. Despite this, the Cornell Alliance for Science, which was launched in 2014 with a $5,6 million grant from the Bill and Melinda Gates Foundation, shares a “completely false story” on Bt brinjal. Through a program called Farming Future Bangladesh, they are continually filling the media with false information on Bt brinjal farmers and their so-called success stories. (The speaker’s presentation slides can be found at this LINK). 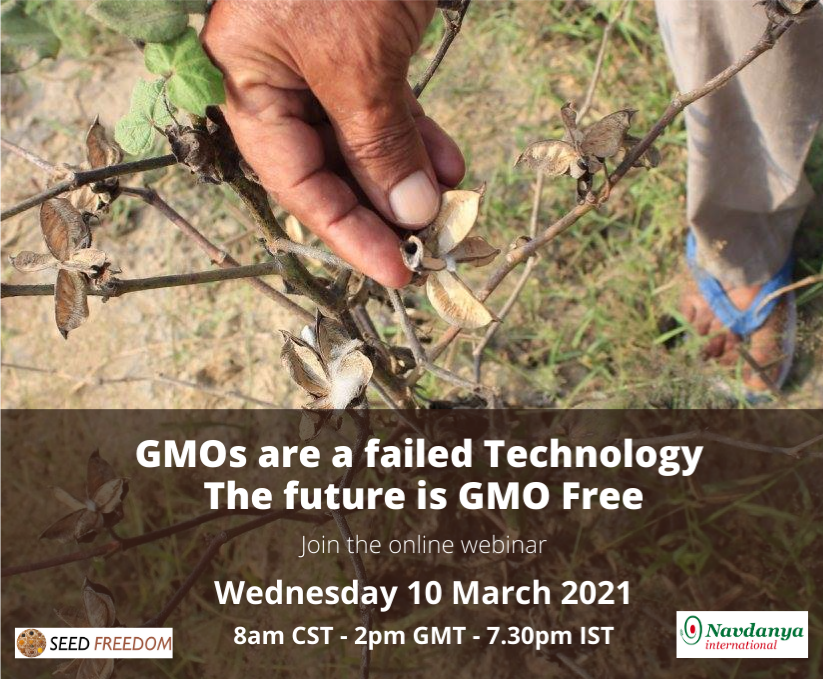 Jonathan Latham, molecular biologist, and former genetic engineer. He now edits the website Independent Science News, which goes into the science of gene editing, its genetic damages, and its off-target effects. The issue is that not all companies are transparent regarding their methods, which makes risk assessment even more complicated and uncertain. “So, when people talk about rolling out gene editing techniques for speciality crops, or hard to engineer crops, they are venturing far into uncharted realms when it comes to biosafety.” What happens in so-called gene editing methods like CRISPR is not an edit of the DNA, it is a cut. The genome becomes fragmented, “leading to either large losses of DNA or to complex rearrangements of chromosomes which are also highly problematic events for a cell.” And then there’s the whole issue of “how a researcher actually makes the edited crop in the first place”. In order to do that, you have to introduce a lot of foreign DNA into the cells. Not only there can potentially be risks with the source of the DNA, but also the editing process often requires cells to go through thousands of challenging mutations to get them into a fit state to receive that DNA. The gene editing machinery can also mistakenly cut wrong, off-target parts of the genome, leading to potentially unwanted or dangerous results. This could be really harmful, especially because “the big companies that really are behind all this have the lobbying power to make the government’s change regulations and to deregulate GMOs.” (The speaker’s presentation slides can be found at this LINK).

Adelita San Vicente, Director General of the Primary Sector and Natural Resources of SEMARNAT – Mexico, tells us about the resistance against the imposition of genetically modified corn in Mexico, the centre of origin of the crop. The maize/corn plant is central to Latin American culture and has undergone 8000 years of progress and improvements. It is a highly adaptable crop that can be grown in different temperatures, climates, altitudes, and soils, and can be cultivated in extreme conditions. “This makes it the ideal crop for the different changes coming with climate change.” Considering all of these different characteristics, corn has become a grain in dispute. To stop the expansion of GMO maize in Mexico, along with the potential health hazards and contamination damage to native maize varieties, 300 organizations gathered to organize a campaign called ‘Sin Maíz No Hay País’ (Without Maize There’s No Country). They took the tools of the justice system into their own hands and presented a class action lawsuit to defend the biodiversity of maize. A judge listened to their plea and ruled in 2013 to stop any activity regarding approval and use of genetically modified corn in Mexico. In 2020, a presidential decree was published, prohibiting the importation and the use of GM maize as well as glyphosate. The current Mexican government is “actively trying to change this amount of influence in [their] agricultural policy. And in particular, trying to shift the emphasis away from large corporations to instead start to support the small farmers”. (The speaker’s presentation slides can be found at this LINK).

According to Vandana Shiva, founder of Navdanya Research Foundation for Science, Technology and Ecology (India) and President of Navdanya International, we are dealing with a “propaganda machine, running a system that claims to be science”. More than a propaganda machine, there is a reductionist mindset, a “monoculture mindset”, based on determinism, that treats living systems as machines. It is a mentality against nature and human beings, pushing GMOs through deregulation and patenting.

Despite this, Dr. Shiva ends the webinar with a hopeful note: “Most seeds are GMO free. Seed banks are growing. And we work with the belief that because we are working in the long run, we are working in alignment with biodiversity, life on Earth, and the rights of all human beings. The truth wins in the long run. In the short run, these rascals look powerful. But they work with empty power because destructive power is not true power. Non-violent creative solidarity, cooperation, mutuality: that’s our strength. ”

The President of Navdanya International closed the online conference with a special message for the youth: “You are never too late to do the right action. The more urgent things get, the more important it is to act on it. I believe as human beings, we have a duty to protect our health, stay free, and not allow food sovereignty and democracy to be hijacked. Our possibilities are limitless of where you begin and where you learn. Each of us owes it to the earth, to our ancestors, to ourselves, and future generations to not let a gang of five corporations destroy our world. We have to do more for biodiversity and our beautiful Earth.”

This post is also available in: Italian, Spanish, French