Karunamoyee Sarder, a landless widow from Bigardana village in Polder 22 of Khulna, Bangladesh, was murdered on November 7, 1990. Along with her fellow villagers, Karunamoyee was leading a procession against the forceful and illegal establishment of shrimp farms in the polder.
Industrial shrimp aquaculture rapidly expanded in coastal Bangladesh in the mid-eighties, despite widespread evidence that it brought with it severe socioeconomic and environmental impacts, affecting the livelihoods, job security and access to land of local communities. In Bangladesh, the industry also entailed severe human rights violations, including murder and rape.
Commemorating the thirtieth death anniversary of Karunamoyee, this seminar brings together activists and scholars from across the world who have first-hand experience of how the industry has affected communities in Asian and Latin American countries. They will speak of not only the history of the movement in Bangladesh, but put the events in a global perspective, exploring both past and contemporary issues. Through this programme, Bangladesh also launches the One Billion Rising 2021 campaign—the theme this year being to reclaim planet Earth from the plunder it has faced and to resist until violence against women and nature stops.

Speaking at the event are:
* Amit K. Thavaraj: Amit lives in Pune, India. He designs chemical instrumentation systems for a living. Since 2008, he has served as the unofficial archivist and researcher of the Asia Solidarity against Industrial Aquaculture (ASIA) network. He also maintains their mailing lists and website.
* Gudrun Hubendick: Gudrun has been engaged in the shrimp issue for 30 years both as an employee and now as an activist within the Swedish Society for Nature Conservation, SSNC. SSNC, founded in 1909, is an NGO with 200,000 members and with branches all over Sweden. She is now a member of the national board of SSNC.
* Kasia Paprocki: Kasia is an Assistant Professor in the Department of Geography and Environment at the London School of Economics and Political Science. She has worked in Bangladesh since 2006 on topics related to development politics and agrarian change.
* Khushi Kabir: Khushi is the Coordinator of Nijera Kori. She began her involvement with citizen’s rights, immediately after the liberation of Bangladesh in 1972, living and working in remote rural areas. She is a passionate feminist, rights activist, environmentalist, humanist, promoting rights of indigenous and other marginalised peoples—particularly in the area of land rights; environmental justice; food sovereignty; secularism, ensuring human dignity, democratic practices and accountability at all levels.
* Syeda Rizwana Hasan: Rizwana is an lawyer with the Supreme Court of Bangladesh and the Chief Executive of Bangladesh Environmental Lawyers Association (BELA). BELA, with Rizwana as the lawyer, was one of the petitioners for the case fought and won against shrimp cultivation in Bangladesh. She is also a visiting faculty in the University of Asia Pacific, State University, Eastern University and North South University. Rizwana has been named as one of the 40 Environmental Heroes of the World by the TIME magazine and was awarded the Goldman Environmental Prize for the year 2009 and the Ramon Magsaysay Award in 2012.
* Shapan Adnan: Shapan is currently Professorial Research Associate with the Department of Development Studies at SOAS, University of London. He holds a PhD in Social and Political Sciences (SPS). He has taught at various universities around the world, including the University of Oxford, the National University of Singapore, the University of Dhaka and the University of Chittagong. He is a member of the International Advisory Board of the Journal of Peasant Studies. His teaching, research and publications are in the fields of political economy, sociology, anthropology and development.
* Vandana Shiva: Vandana, a world-renowned environmental thinker, activist, feminist, philosopher of science, writer and science policy advocate, is the founder of Navdanya Research Foundation for Science, Technology and Ecology (India) and President of Navdanya International. Trained as a physicist, she later shifted to inter-disciplinary research in science, technology and environmental policy. She is the recipient of many awards, including the Right Livelihood Award in 1993, also known as the ‘Alternative Nobel Prize’, and named among the top five ‘Most Important People in Asia’ by AsiaWeek in 2001. She is a prolific writer and author of numerous books and serves on the board of the International Forum on Globalization, and is a member of the executive committee of the World Future Council.

The seminar is co-organised by Nijera Kori, One Billion Rising (OBR), Asia Solidarity against Industrial Aquaculture (ASIA), Navdanya, and the London School of Economics Social Life of Climate Change. 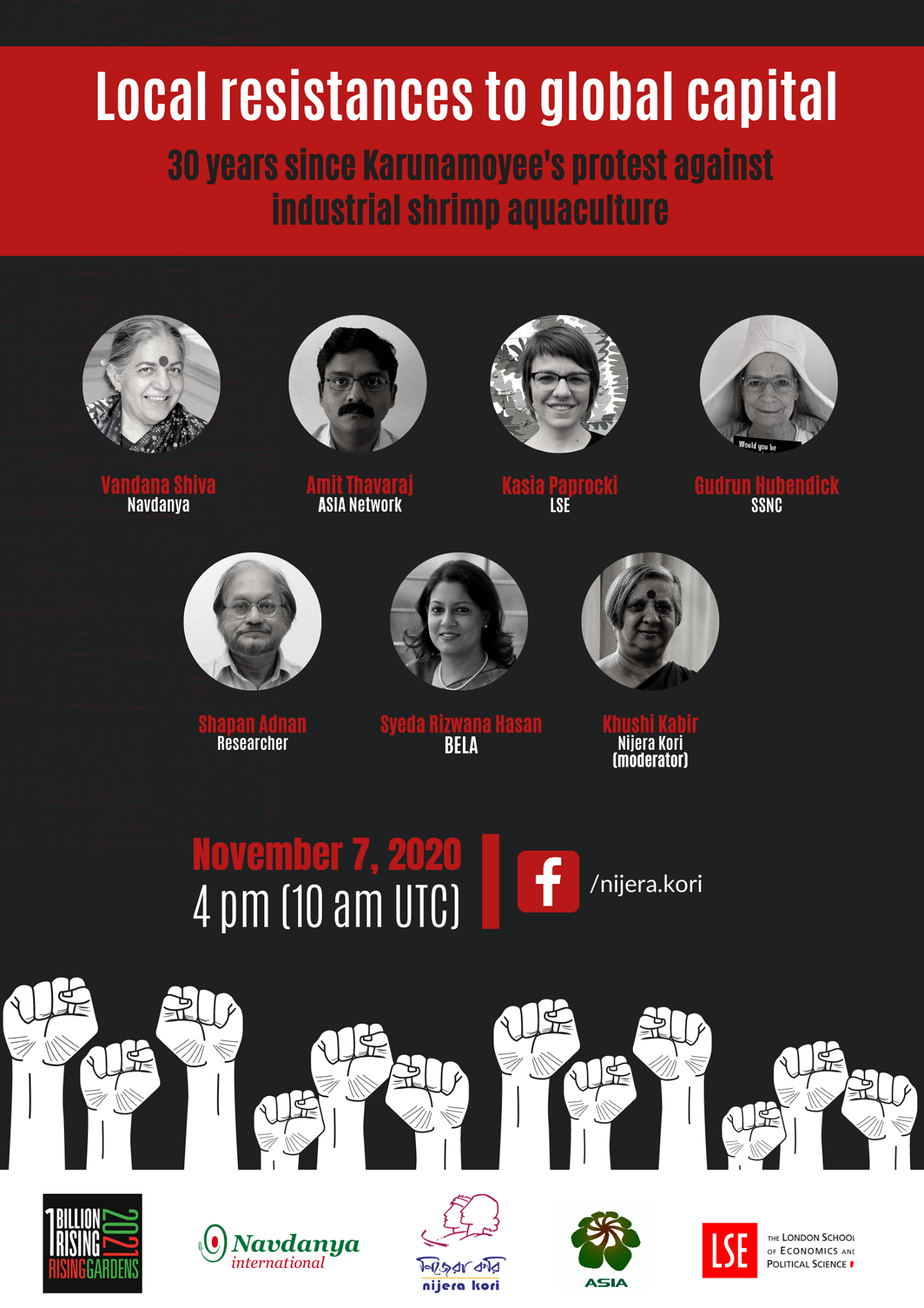