A Precautionary Tale: How One Small Town Banned Pesticides, Preserved Its Food Heritage, and Inspired a Movement

Home > News > In the News > A Precautionary Tale: How One Small Town Banned Pesticides, Preserved Its Food Heritage, and Inspired a Movement
19/02/2018 at 3:40 pm
Food for Health, Poison-Free Food and Farming
In the News, News, Testimonials
Mals

It was the first day of two weeks’ voting. The rural alpine municipality of Mals was about to consider a revolutionary possibility – a vote for a “Pesticide Free Mals.” A “yes” vote would end all pesticide use in Mals and therefore initiate a full transition to diversified organic agriculture.

The Malsers had awoken to find their township awash with bright yellow sunflowers. The flowers sat in doorways and floated in fountains. Some were painted on manhole covers, others were on sticks in public gardens. Their message was clear. Each sunflower had Ja! (Yes!) boldly printed in its center. The national police ordered them removed, but the flowers mysteriously “regrew” each night until the two weeks’ voting was finished.

This sunflower skirmish was the final exchange in a controversy triggered originally by the appearance of the first industrial apple orchards in Mals. With this new apple monoculture came an influx of highly toxic pesticides. These chemicals, directly and indirectly, posed an existential threat to the traditional rural culture of Mals and to the health and the wellbeing of its citizens. Yet to challenge “Big Apple” was to challenge the myth of progress — the nearly universal belief that the uptake of new technology is essential and inevitable.

A Precautionary Tale For All 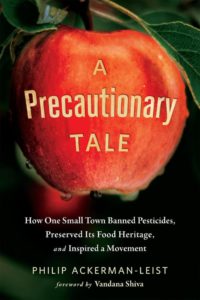 Philip Ackerman-Leist published A Precautionary Tale in November 2017. Subtitled How One Small Town Banned Pesticides, Preserved Its Food Heritage, and Inspired a Movement, it could not have been better timed. Earlier in 2017, three separate U.S. groups publicly released large digitized chemical document troves (The Poison Papers, Toxicdocs, and the Monsanto Papers). These searchable databases expose not only the extreme toxicity of common synthetic chemicals, many used in industrial agriculture, but the collusion between industry and regulators necessary to keep these chemicals on the market.

The question therefore arises, “How can individuals and communities protect themselves when regulatory systems do not?” A Precautionary Tale provides a creative and inspiring answer.

Mals is the name of the largest of 11 villages that together constitute the municipality of Mals. This region of the Italian Alps, part of the Upper Vinschgau valley, has a single mayor and is further united by its unique Tyrolean culture.

For centuries, the villages thrived within a distinctive agro-ecosystem of small but diversified family farms. Even today, cows, goats, pigs and poultry graze in tiny fields, one farmer’s field interspersed with another’s. Also intermixed are fields of vegetables, hardy local grains, and hay. Historic castles, a monastery, and medieval architecture provide visual links to the past. There are abundant mountain views and wildlife to attract tourists.

The township had recently elected a young mayor on a sustainability platform. Train lines and bike paths had been expanded and many farmers had transitioned to organic agriculture. Eco-tourism became a growing business.

Much of A Precautionary Tale is told through Ackerman-Leist’s energetic portraits of the redoubtable Malsers themselves. His descriptions of their personalities, livelihoods, and creative efforts on behalf of “A Pesticide Free Mals” make the book a pleasure to read.

Ackerman-Leist visits seed saver Edith Bernhard, for example, who for two decades has collected and grown regional organic heirloom tomatoes, herbs, vegetables, fruits, and berries. Her display gardens are a riot of biodiversity, with tomatoes ranging in color from black to white, and over 250 heirloom herbs.

In 2000 Edith began specializing in historic grains of the Vinschgau valley region. One of her seed saving triumphs was to rescue and grow out two heads of 100 year old spelt grains, developing them into a variety she called Dinkel Burgeis (Burgeis spelt). First given to her by a mason who found them wrapped in an 1895 newspaper in the attic of a neighboring house, Dinkel Burgeis is now being grown again by Vinschgau valley farmers. Regional bakers use historic grains like spelt and rye, and ancient varieties of fruit like the Palabirne, to make traditional breads.

Before the second half of the 20th century, bread was baked only two or three times a year. It was difficult to get the grain to the miller, baking bread was hard work, and ground flour needed to be used before it went off. One of the region’s most distinctive breads is a long-storing herbed rye. This is so hard it requires a special cutting board, with a knife attached by its tip for “safe chopping.” The board has three tall sides to catch flying pieces of bread. These are soaked in soup, milk or wine before eating, presumably to avoid chipping a tooth.

From Ackerman-Leist’s cultural tour of the Mals region it becomes clear that the Malsers had a lot to lose from a Big Apple takeover.

While Alpine Mals was strengthening its local economy, the Vinschgau valley below had become engulfed by the Tyrolean apple industry. Once as diversified and enchanting as Mals, the lower valley had been transformed into a regimented monoculture of fences, cement posts, and trellised dwarf apple trees.

Big Apple’s presence had changed more than just the view. Apple growers can legally spray up to 30 different pesticides. They can also spray each individual pesticide 12–14 times a year. Consequently, lands adjacent to apple farms are continually subjected to pesticide drift. The impact can be devastating.

For organic farmers in the lower Vinschgau valley, the apple orchards proved to be a direct threat to their livelihood. The Gluderer family, for example, had built up a thriving organic herb business over many years. As orchards surrounded their farm, their herbs began to test positive for pesticides. They tried to block drift by growing giant hedges. However, neither the hedges, nor the orchard’s mandatory spray buffer zones were sufficient. As a last resort, the Gluderer family covered their herb beds with an enormous plastic greenhouse. Without its protection, their herbs were too contaminated to sell.

Their experience provided a clear warning to organic farmers in Mals.

Eventually, the first industrial orchards appeared in Mals. For hardworking farmers, Big Apple held out the promise of big profits for little labor. Land prices, once relatively low, began to rise in response. Some Malsers became uneasy. When an orchard was planted next door and his organic hay tested positive for pesticides, farmer Günther Wallnöfer went to see the mayor.

This started the public dialogue over the future of Mals. The question ultimately engaged the whole township, as well as orchard owners and the Tyrolean apple industry. Its culmination was the ballot initiative for a “Pesticide Free Mals.”

In the beginning, everyone hoped for “co-existence” — that with adequate care, orchard owners could protect their neighbors from toxic drift. This would allow each farmer to choose her or his preferred form of agriculture – from industrial apple orchards to diversified conventional or organic farms.

To test this possibility for Mals, a local environmental group took more than 300 samples from land adjacent to orchards. Every sample showed contamination with complex mixtures of highly toxic pesticides. These included the organophosphate pesticide chlorpyrifos and the fungicide mancozeb. Many residue levels were above legal limits. Tests also showed pesticide contamination in the Mals’ schoolyard.

The Mals data were clear–orchard pesticides spread freely to neighboring fields, waterways, footpaths, parks, and other public areas. Co-existence was not possible.

War of the Worldviews

Preserving the historic diversified farming system of Mals was essential to the municipality’s plans for a sustainable food and eco-tourism-based economy. Yet the Tyrolean apple industry clearly intended to continue its expansion into Mals. It had the backing of the Governor of the South Tyrol Province to which Mals belonged. Two experimental orchards had already been planted; their purpose was to test which apples and other fruits were best suited to the area. The citizens of Mals realized they needed to act fast if they wanted to choose their own future.

In response, over 60 residents formed the Promotorenkomitees für eine pestizidfreie Gemeinde Mals (Advocacy Committee for a Pesticide-Free Mals). Their initiative asked the mayor of Mals to pass legislation that would (1) protect the health and diversity of people and the economy; (2) promote organic and biodynamic agriculture; and (3) prohibit toxic chemical pesticides within municipal boundaries.

The initiative’s supporters ranged from farmers, pharmacists, parents, and pediatricians, to dedicated seed savers, environmentalists, homesteaders, and the owners of small local businesses. A Precautionary Tale describes how each contributed something crucial to the debate. Expert opinion and analysis were sought, public discussions were held, letters were written to the local paper and to politicians, guerilla actions conducted, and festivals were held to celebrate the unique culture and history of Mals.

The ensuing uprising of public support ultimately gave the mayor the mandate he needed to schedule a legally binding referendum on the initiative for a Pesticide Free Mals.

While Ackerman-Leist describes the efforts of the apple industry to block the initiative, his story focuses on the origins of the campaign for a Pesticide Free Mals, its audacious yet practical tactics, and its ultimate triumph. When the votes were in, the initiative had passed, with 75% voting “yes” and 25% “no.”

As a result of the new legislation, Mals schools and other public institutions will now serve organic food. Furthermore, organic farms and those transitioning to organic practices will be financially supported. This measure was intended to benefit all Mals farmers, including any who initially opposed the initiative, and to encourage the development of new sustainable businesses.

How did the revolutionary idea of a Pesticide-Free Mals win out over the formidable Big Apple? The tactics of the Pesticide Free Mals movement were successful precisely because they were the tactics of the larger global food movement. While not every community starts with such an intact historic culture as Mals, all communities need healthy soil, water, and air; wholesome food; and a sustainable inclusive economy. A Precautionary Tale provides a concrete example of how the holistic thinking and democratic power of the food movement could eliminate toxic chemicals from all agriculture.

Including an eloquent call-to-arms from scientist and activist Vandana Shiva and a useful “Activist’s Primer,” complete with additional tips for U.S. activists, A Precautionary Tale is an enjoyable and practical guide to positive change.

Reviewer: Allison Wilson, PhD is co-founder and Science Director of the the Bioscience Resource Project.

For more more information and photos documenting the people, places, and events in A Precautionary Tale see: Toppling Goliath