Gates: the interests behind the fake solutions to climate change

In Bill Gates’ vision, technology seems fated to fix every single damage that has been inflicted on our planet and climate change has recently been added to the list. But this is the same mentality that has taken us to the devastating stage we currently find ourselves in, while the only thing improving exponentially is the profits of the corporations taking advantage by selling these very technologies. It is necessary to step out of this technofix hysteria in order to reclaim a holistic vision based on real farmers, healthy and nutritious food, and on an agroecological model that does not impact on climate but, instead, helps to mitigate it. No fake burger can do that. The latest report from Navdanya International, “Bill Gates & his Fake Solutions to Climate Change“, details the reasons behind Bill and Melinda Gates’ attempts to focus the debate on miraculous technologies and the real interests behind its propaganda. 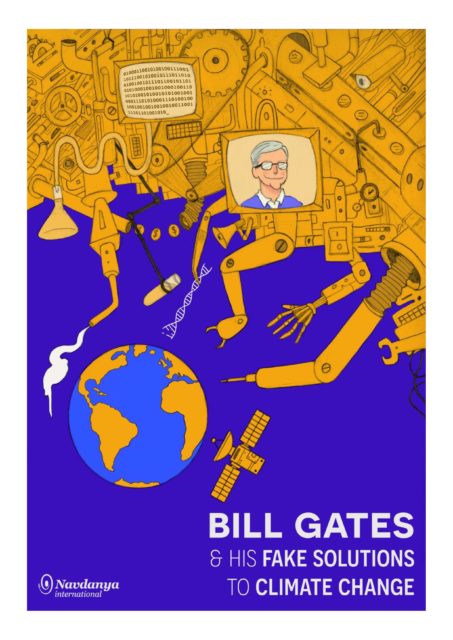 While Gates’ many investments are all seemingly justified by a noble humanitarian and environmental cause, the report shows that they actually allow him to impose his techno-solutionist strategy through direct influence over all types of global development protagonists.

But this game of billionaire profit-making and corporate partnerships is even clearer in one of Gates’ most prominent personal investment funds: Breakthrough Energy Ventures. The companies funded by Breakthrough are riddled with ex DuPont, Monsanto, PepsiCo, and Microsoft executives, revealing how the same corporations which precipitated our health and ecological crisis are now selling us back equally risky solutions to the problems they created in the first place.

The report highlights one of these so-called technical ‘solutions’ through the example of synthetic food, which aims to replace animal products with highly processed ingredients, usually through synthetic biology. Billionaires are heavily investing in this growing market: Gates alone has spent 50 million dollars in leading company Impossible Foods and actively finances several others. Fake food is advertised as a solution to climate change and environmental degradation, but in reality, fake food has a carbon footprint seven times larger than less-processed plant proteins. Cell-based meat also emits more GHG than some animal products and recent research even suggests that over the long-term, its environmental impact could be higher than that of livestock. Far from ending climate change or world hunger, fake food still relies on an industrial agricultural model, based on monocultures, toxic pesticides and GMOs, that is destroying our ecosystems and threatening our health. The report also shows how the patenting of these artificial food growing techniques has become an instrument for corporate and billionaire profit-making, shifting power away from farmers and toward biotech companies, while completely ignoring the solutions offered by the regenerative agriculture movement.

These technological innovations, offered as the only solutions to the world’s problems, ensure the further concentration of failed industrial models, diverting attention away from the deep systemic changes that are needed to address the crises we are facing today. We do not need to go further down the path that is already destroying our health and biodiversity. Instead, we have the opportunity to truly foster an ecological approach to food and agriculture which can provide a  long-lasting solution to climate change, and ensure food sovereignty. Diverse local communities are already transitioning to this ecological and democratic path, reclaiming seed, food, and knowledge as commons while taking into deep account the web of biodiversity to protect Earth and human health. The report calls for supporting this transition and for dismissing the fake alternatives proposed by the philanthrocapitalists and their private company partners.