One Empire over Seed: Control Over the World’s Seed Banks

Home > News > One Empire over Seed: Control Over the World’s Seed Banks
28/10/2020 at 9:08 am
Corporate Control and Economic Democracy, Philantrocapitalism, Seed Freedom
News, Our Articles

Since the onset of the Neolithic Revolution some 10.000 years ago, farmers and communities have worked to improve yield, taste, nutritional and other qualities of seeds. They have expanded and passed on knowledge about health impacts and healing properties of plants as well as about the peculiar growing habits of plants and interaction with other plants and animals, soil and water. The free exchange of seed among farmers has been the basis to maintaining biodiversity and food security.

A great seed and biodiversity piracy is underway, not just by corporations — which through mergers are becoming fewer and larger— but also by super rich billionaires whose wealth and power open doors to their every whim. Leading the way is Microsoft mogul, Bill Gates.

When the Green Revolution was brought into India and Mexico, farmers’ seeds were “rounded-up” from their fields and locked in international institutions, to be used to breed green revolution varieties engineered to respond to chemical inputs [1].

The International Rice Research Institute (IRRI) in the Philippines and the International Maize and Wheat Improvement Centre (CIMMYT), were the first to roundup the diversity from farmers’ fields and replace it with chemical monocultures of rice, wheat, and corn. Others quickly followed.

This hijacking of farmers’ seeds is best highlighted with the shameful removal of India’s pre-eminent rice research scientist Dr. R.H. Richaria, as the head of India’s Central Rice Research Institute (CRRI) in Cuttack, Orissa, which housed the largest collection of rice diversity in the world, for refusing to allow the IRRI in the Philippines to pirate the collection out of India. With his removal at the behest of the World Bank, Indian peasant intellectual property was hijacked to the IRRI in the Philippines which later became part of the newly created Consultative Group of International Agriculture Research (CGIAR) [2].

Farmers’ seed heritage was held in the private seed banks of CGIAR, a consortium of 15 international agricultural research centers, controlled by the World Bank, the Rockefeller and Ford Foundations, as well as of course the Bill and Melinda Gates Foundation (BMGF), which since 2003, has poured more than $720 million into the CGIAR centres. CGIAR gene banks presently manage 768,576 accessions of farmer’ seeds. Taken together, CGIAR gene banks represent the largest and most widely used collections of crop diversity in the world. [3] 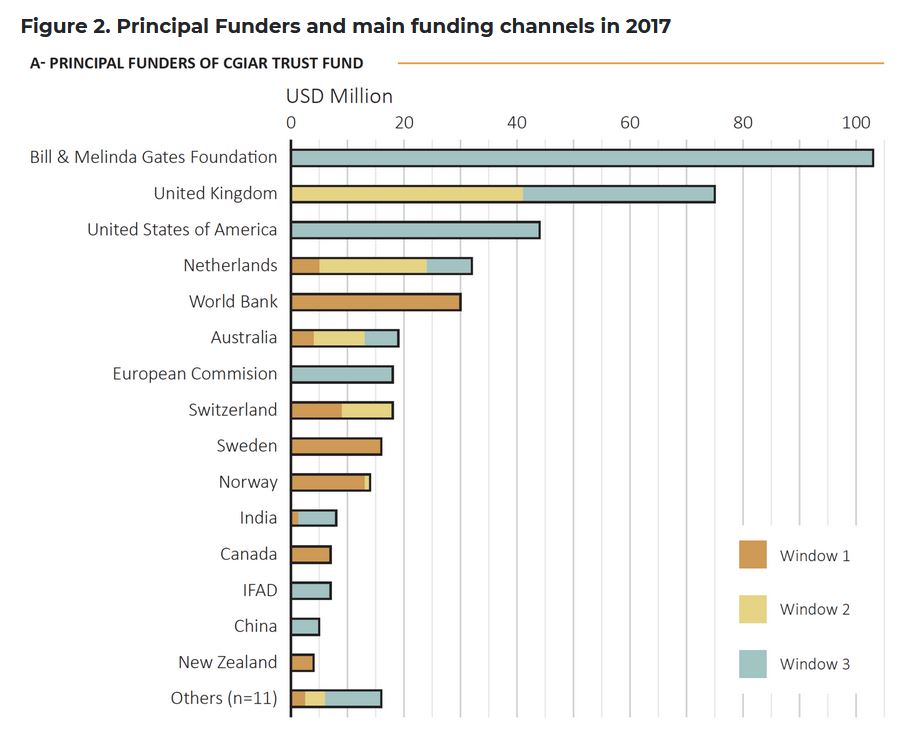 The Bill & Melinda Gates Foundation operates a bit like the World Bank, using its financial power and prowess to take control of agriculture and influence government and institutional agricultural policies. By far the largest funder of the CGIAR, Gates has successfully accelerated the transfer of research and seeds from scientific research institutions to commodity-based corporations, centralizing and facilitating the pirating of intellectual property and seed monopolies through intellectual property laws and seed regulations.

The urgency with which this restructuring of CGIAR and centralization of control is being done is reflected in the IPES Food open letter of 21 July 2020 as follows: “The process now underway to reform the CGIAR is therefore imperative and of major public interest. The ‘One CGIAR’ process seeks to merge the CGIAR’s 15 legally independent but cooperating centres, headquartered in 15 countries, into one legal entity. The impetus has come from some of its biggest funders, notably the Bill and Melinda Gates Foundation, the World Bank, and the US and UK governments.”[4]

The aim of “One CGIAR”, overseen by “One CGIAR Common Board’ is to merge it to become part of “One Agriculture”, aka “Gates Ag One” – Gates’ latest move in controlling the world’s seed supply [5]. Gates has indicated he will more than double the CGIAR present budget, from $850 million to $2 billion a year.

The Seed Freedom movement has been calling for the CGIAR gene banks to return these stolen farmers varieties back to the farmers. The lessons of the Green Revolution since the 1960’s have shown us that the chemical path of monocultures has undermined Earth’s capacity to support life and food production by destroying biodiversity, soil and water [6] [7], as well as contributing to climate change [8]. It has dispossessed small farmers through debt for external inputs. And it has undermined food and nutritional security [9]. The experience of the last half century has made clear that Seed Sovereignty, Food Sovereignty and Knowledge Sovereignty is the only viable future of food and farming. 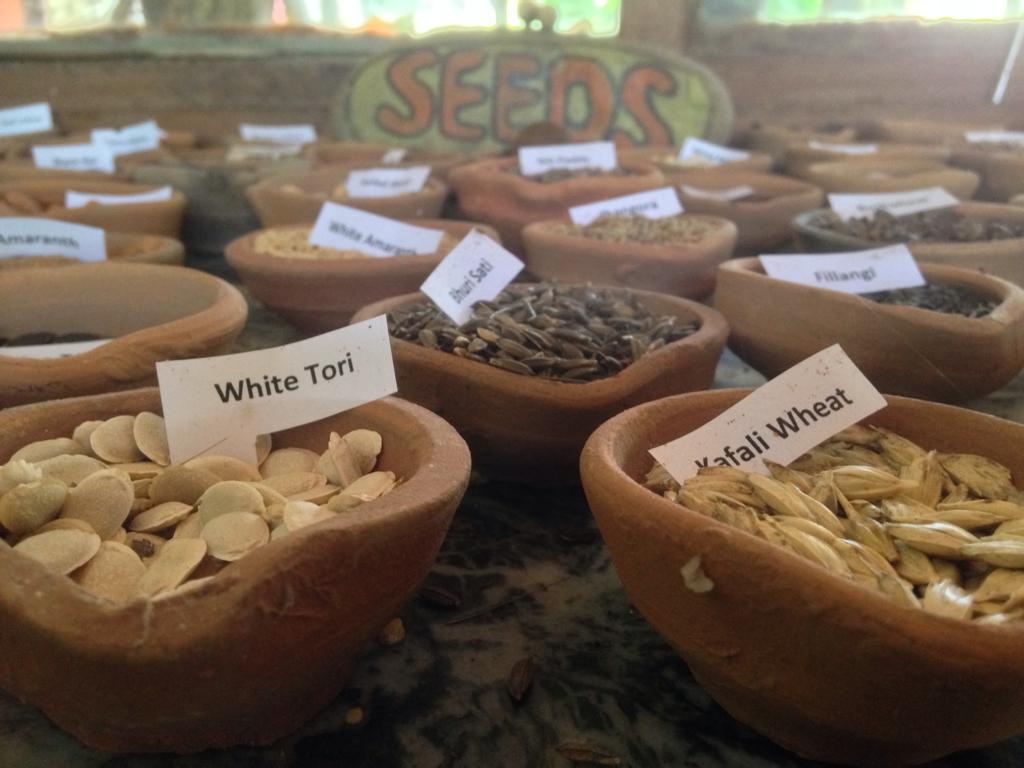 Besides taking control of the seeds of farmers in the CGIAR seed banks, Gates (along with the Rockefeller Foundation) is investing heavily in collecting seeds from across the world and storing them in the Svalbard Global Seed Vault in the Arctic archipelago – aka the Doomsday Vault – created to collect and hold a global collection of the world’s seeds. It is in association with the Consultative Group on International Agricultural Research (CGIAR) and the Crop Trust [10].

The Crop Trust, based in Germany, funds and coordinates the Svalbard Seed Vault. In addition to the Bill and Melinda Gates Foundation, its funders include the Poison Cartel adherents CropLife Dupont/ Pioneer Hi-bred, KWS SAAT AG, and Syngent AG.

The largest numbers of accessions stored in the Seed Vault are varieties of rice, wheat, and barley crops; more than 150,000 samples of wheat and rice, and close to 80,000 samples of Barley. Other well represented crops are sorghum, phaseolus bean species, maize, cowpea, soybean, kikuyu grass and chickpea.

Crops such as potatoes, peanuts, cajanus beans, oats and rye, alfalfa, the cereal hybrid Triticosecale and Brassica’s are represented by between 10,000 and 20,000 seed samples.[11]

It should come as no surprise that Gates is also funding Diversity Seek (DivSeek), a global project launched in 2015 to map the genetic data of the peasant diversity of seeds held in gene banks to then take patents on these seeds through genomic mapping [12]. Seven million crop accessions are in public seed banks.

Biopiracy is carried out through the convergence of information technology and biotechnology where patents are taken on seeds through “mapping” their genomes and genome sequences.

While living seed needs to evolve “in situ”, patents on seed genomes can be taken from seed “ex situ. DivSeek is designed to “mine” and extract the data in the seed to “censor” out the commons. In effect it robs the peasants of their seeds and knowledge, it robs the seed of its integrity and diversity, it erases evolutionary history and the seed’s link to the soil, reducing it to a simple “code”. This ‘genetic colonialism’ is an enclosure of the genetic commons [13].

The participating institutions in DivSeek are the CGIAR nodes and ‘public’ universities like Cornell and Iowa State, which are being increasingly privatized by the biotechnology industry as well as the Gates Foundation. BMGF funds Cornell’s Alliance for Science, the corporate worlds’ pseudo-science propaganda outlet while Iowa State is the institution promoting the unethical human feeding trials of GMO bananas. Other Gates-funded DivSeek partners are the African Agricultural Technology Foundation and Africa-Brazil Agricultural Innovation Marketplace developed by the Brazilian Agricultural Research Corporation (Embrapa)[14].

Through a new ‘front’ corporation, Editas Medicine [15], BMGF is investing in a one-year-old experimental genetic engineering tool for gene editing, CRISPR-Cas9. Though the technology itself is immature and inaccurate, it has become a gold rush for new patents. The language of “gene editing” and “educated guesses” is creeping into scientific discourse.

Piracy of common genomic data of millions of plants bred by peasants is termed “big data”. Big data however is not knowledge, it is not even information. It is ‘privateered’ data, pirated and privatised.

Seeds are not just germplasm. They are living, self-organizing entities, subjects of evolution, history, culture, and relationships.

In the 1980s, Monsanto led the push for GMOs and patents on seed and life. Today the flag bearer is Bill Gates. In a nutshell: one billionaire given free access to use his wealth to bypass all international treaties and multilateral governance structures to help global corporations highjack the biodiversity and wealth of peasants by financing unscientific and undemocratic processes such as DivSeek, and to unleash untested technologies such as the CRISPR technology on humanity.

Over the last two decades, thousands of concerned citizens and organizations have taken action and written laws to protect the biodiversity of the planet and the rights of farmers to seed, and the rights of consumers to safety, among them, the Convention on Biological Diversity (CBD); the Cartagena Biosafety Protocol to the CBD; and the International Treaty on Plant Genetic Resources Treaty for Food and Agriculture (ITPGRFA).

This article is extracted from Navdanya International Global Citizens’ Report “Gates to a Global Empire“, which was presented on October 14th, 2020, through an online event with the authors. The report gathers evidence and throws light on the dangers of philanthrocapitalism, which is boosting the corporate takeover of our seed, agriculture, food, knowledge and global health systems, manipulating information and eroding our democracies. Contributors to the Seed and Biopiracy sections  outline how Bill Gates and his foundation routinely undermine international treaties created to protect biodiversity, farmers rights, and the sovereignty of countries and communities of their seed and biodiversity wealth. The folly of imposing this failed technology in Africa is well documented in the Agriculture section articles. 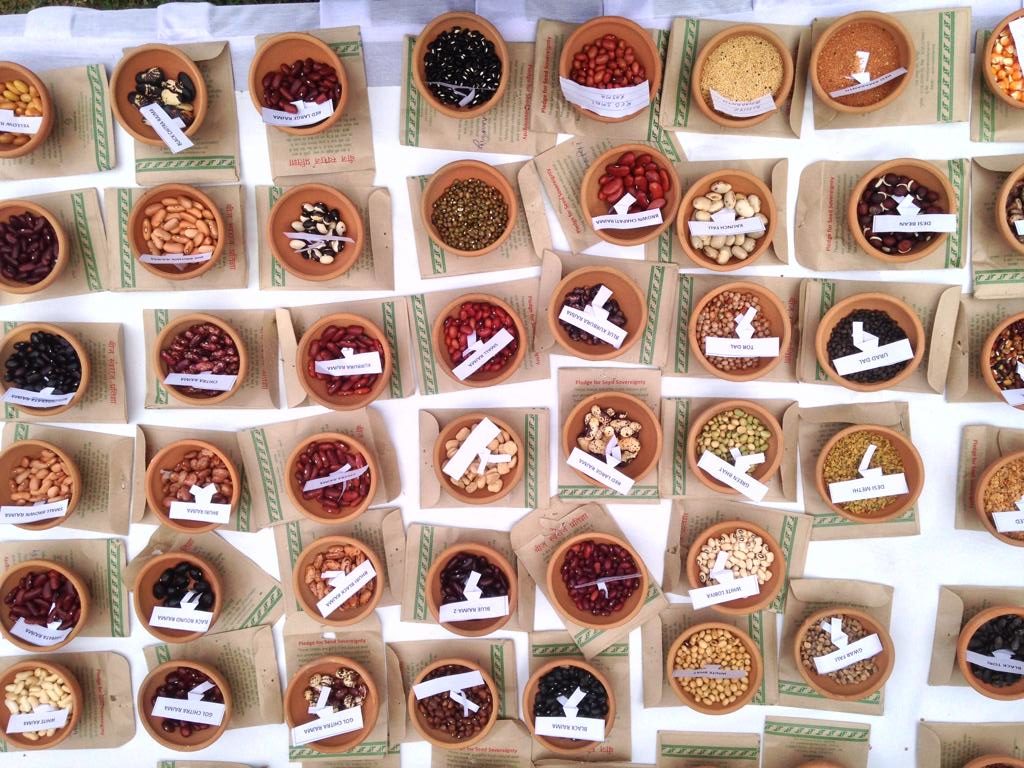 [11]Mooney, Chris. “Why the World Is Storing so Many Seeds in a ‘Doomsday’ Vault.” Washington Post, April 15, 2016. https://www.washingtonpost.com/news/energy-environment/wp/2016/04/15/why-the-world-is-spending-half-a-billion-dollars-to-protect-humble-seeds/