The Law of The Seed 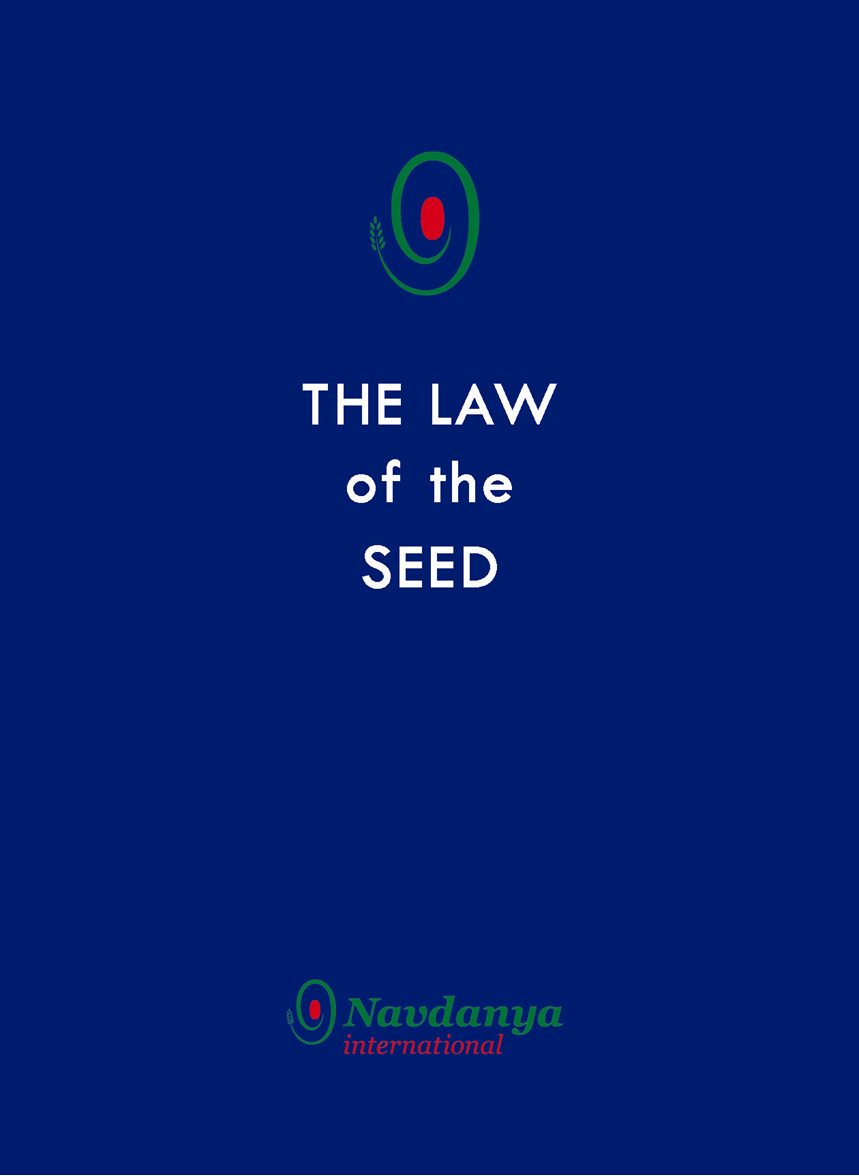 “Seed freedom is Earth Rights … it is the right of the seed in all its diversity and self organization to evolve into the future.” Dr. Vandana Shiva, Rio+20 Earth Summit 2012

In country after country local, open source seeds are being made illegal to establish a Monsanto monopoly on Seed and force GMOs and patents everywhere. This is a vital aspect of Earth Rights. Seed is the first link in the food chain and embodies millennia of evolution and thousands of years of farmers breeding as well as the culture of freely saving and sharing seed. It is the expression of earth’s intelligence and the intelligence of farming communities down the ages.

The Law of The Seed aims to bring back biodiversity and recognition of farmers’ rights, to bring back democratic systems in society to shape laws as well as knowledge.

The Law of the Seed puts at its centre Seed Freedom – the freedom of the seed, of farmers and of citizens – in place of the illegitimate freedom of corporations to claim the genetic wealth of the planet as their property, and criminalize citizen freedoms. The freedom to save and exchange seed is vital in our time characterized by multiple crises – the biodiversity crisis, the water crisis, the food crisis, climate crisis, and the economic crisis, all of them part of a single crisis: a crisis of ethics and values.

The Law of the Seed comes out of an ecological and democratic imperative for the long term future of the planet and of its inhabitants. Through it, we hope to sow the seed for a paradigm shift in seed, food and agriculture. Like the seed, this is a work in evolution. Adapt it, use it for your context. Its future is in your hands.

We hope that this Law of the Seed document will help farmers and seed breeders in their demands that politicians uphold their rights as seed savers and producers and so too help convince politicians that agro-biodiversity must be at the heart of any seed legislation if they are to tackle the hazards of climate change and food security.

The above includes excerpts from the The Law of the Seed.

The Law of the Seed is put forward as a tool to be used by citizens everywhere and in every context to defend their seed freedom and seed sovereignty as well as to provide a practical guide to all future development of laws and policies on seed.

We hope that it will serve as a catalyst for citizens to spread awareness of the critical state of the seed and of biodiversity and of how science and laws are being manipulated, threatening the seed and food sovereignty of peoples in all parts of the world. We hope that citizens everywhere will use The Law of the Seed as an advocacy tool to push for local, regional and national legislation that favors and respects seed freedom and the law of the seed.

We urge people’s representatives and institutions to use The Law of the Seed as an instrument to help shape laws related to the seed, putting the obligation of protecting biodiversity, farmers’ rights and overall ecological productivity as the superior objectives, and to strengthen laws governing their patent offices to keep seed in the public domain. The Law of the Seed reminds and urges national governments of their obligation to complete the mandatory review of Article 27.3(b) of the TRIPS Agreement of WTO as well as to commit themselves to their constitutional obligations to protect biodiversity and reverse patents on life and patents on seed.

We hope also that the Law of the Seed will serve to ensure that the integrity and independence of scientific research is defended, and dedicated to the promotion and mainstreaming of biodiversity, farmers’ rights and the public good, and to boost research on seed diversity, quality and resilience which address the challenges of the ecological, economic and food security crisis within a world scenario of climate change.

This document is based on inputs and discussions at a working group meeting of leading lawyers and scientists, and members of the International Commission on the Future of Food and Agriculture, that took place at Navdanya International, Florence, Italy in February 2013. The document includes subsequent modifications of the working group which have been merged and streamlined into the present document by an editorial team composed of Vandana Shiva, Research Foundation for Technology, Science and Ecology/Navdanya, Caroline Lockhart, Navdanya International, and Ruchi Shroff, Navdanya.

The Working Group on the Law of the Seed was composed of the following persons:

Seed Freedom
Publications of the International commission on the future of food and agriculture, Reports
... Download