Home > Events > Navdanya International presents its new report on the future of food in Florence
31/10/2019 at 11:11 am
Agroecology, Food for Health, Poison-Free Food and Farming
Events, Press Releases
Vandana Shiva
This post is also available in: Italian

On 9 November, at 8:30 p.m., Navdanya International will present its new report “The Future of Food, Farming with Nature, Cultivating the Future“, at the Biblioteca delle Oblate in Florence, on the occasion of the meeting “For an Agriculture that is good for the climate” with Vandana Shiva, President of Navdanya International, Salvatore Ceccarelli, international expert in agronomy, specialist in agricultural genetics and member of the board of directors of Navdanya International, Nadia El-Hage Scialabba, international expert in food ecology with 30 years of experience at FAO,  Bernardo Gozzini, climatologist and director of the Lamma Consortium, Alberto Bencistà, president of Firenze Bio. During the meeting, the Italian edition of the latest book by Vandana Shiva “Biodiversity, Agroecology, Regenerative Organic Agriculture”, (“Agroecologia e crisi climatica”), published by Terra Nuova Edizioni, will be presented. The event will also be attended by representatives of the City Council and Region, and Maria Grazia Mammuccini president of Federbio. 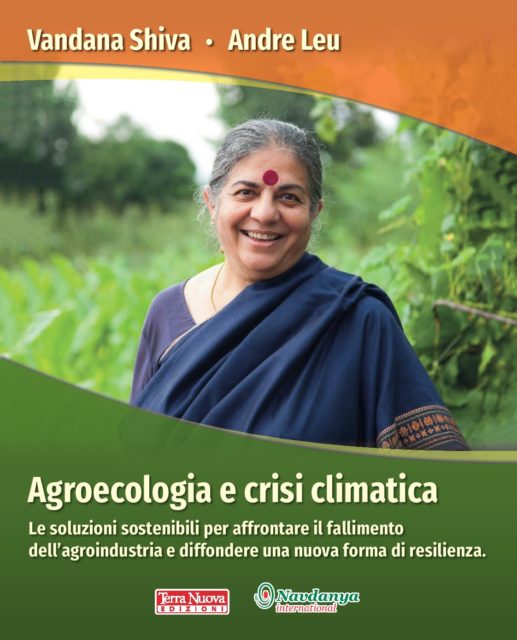 All over the world small farmers and gardeners are already practicing a biodiverse and ecological agriculture, rejuvenating the soil and saving and breeding their seeds, providing healthy and nutritious food to their communities. Communities that choose to put the common good at the heart of local economic systems, based on solidarity and cooperation, continue to offer creative and innovative solutions, thus re-appropriating food systems and often succeeding in making big agribusiness irrelevant.

The report brings together international experts and gathers evidence of global resistance against the industrial agrifood system, as well as examples of good ecological practices among farmers, local communities and civil society organizations, as part of Navdanya International’s campaign for Poison-free Food and Farming. In continuation of the work of the International Commission on the Future of Food and Agriculture, the report offers a global perspective and is a sequel to the analysis of agri-food systems begun with the publication of the Food for Health Manifesto of 2018.

Excerpts from the report “The Future of Food, Farming with Nature, Cultivating the Future”:

The global value of food production is $2.8 trillion, environmental costs are estimated at $3 trillion, to which should be added another $2.8 trillion for costs related to the loss of social welfare and conflicts caused by the loss of natural resources such as soil and water.

World sales of organic products have tripled in a decade, rising from $18 billion in 2000 to $59 billion in 2010. Despite exponential growth in sales, supply is not keeping pace with demand, as organic farmland increased from 14.9 to just 35.7 million hectares over the same period.

Why is biodiversity important?

Agro-biodiversity is important for food security, to increase agricultural income, generate employment and reduce exposure to risk. The decline in diversity has increased the vulnerability of crops as their genetic uniformity makes them unable to respond to climate changes, especially short-term changes. In addition, uniform crops provide an ideal breeding ground for the rapid emergence of fungicide-resistant variants as shown by the potato epidemic in Ireland and ensuing famine in the late 19th century. Crop diversity, on the other hand, has been shown to be highly beneficial in restricting the development of diseases.

In Italy, a family of farmers in Trentino were forced to build protection barriers against pesticide drift at a cost of 150,000 Euros in order to protect their organic crops.

In Brazil, agribusiness is fueling violence against family farmers and indigenous nations. In 2017, 2,307 families were expelled from their land, 28 farmers were killed, 27 tortured, 167 threatened with death and 1,465 identified as slave labourers.

For over a decade, Brazil has been the largest consumer of pesticides in the world. In 2017 alone, 539.9 thousand tons of pesticide active ingredients were consumed in Brazil, more than 45% being Glyphosate. In the first half of 2019, around 240 new pesticides were approved to be used in the country’s fields, many of them banned in Europe and elsewhere. The majority of pesticides consumed are related to GMO planting. In 2016, Brazil planted 41.9 million hectares of transgenic seeds crops, which makes the country the second largest producer of transgenics in the world.

In Costa Rica, a study on sloths (Bradypus variegatus y Choloepus hoffmanni) on a farm in Pueblo Nuevo de Guácimo surrounded by intensive cultivation of banana, pineapple and paddock, found traces of pesticides in hair, arm washing and oral cleansing of the sloths analyzed. Among the substances found: ametrine, chlorpyrifos, chlorothalonil, diazinon, difenoconazole, deet, ethoprophos and thiabendazole. All of these are used in banana and pineapple plantations. According to the study, this contamination is produced “probably” by the ingested food contaminated and by direct contact with pesticides.

Around the world, more and more mayors and other representatives of local municipalities are taking a stand to protect the health of their citizens and their right to an environment without poisons. For example in Italy, approximately 70 municipalities have banned or restricted the use of pesticides on the basis of the Precautionary Principle.

Among those are the four provincial capitals of Belluno, Bolzano, Trento and Verona. An emblematic example is Mals, the municipality of Val Venosta which has chosen to ban the use of pesticides in its territory by means of a referendum and the political commitment and involvement of citizens. However, the resolution that followed the referendum was never implemented, first blocked and then annulled by the Court of Auditors of Bolzano.

In France, about 56 small towns and villages have issued regulations against pesticides, and are putting pressure on the government, which subsequently launched a public consultation on safety distances. Last September, the metropolitan areas of Paris, Lille, Nantes, Grenoble and Clermont-Ferrand also announced a ban on the use of pesticides in their territory.

In 2017, 200 municipalities in the Philippines, members of the League of Organic Municipalities and Cities (LOAMCP) signed a joint agreement to create new policies based on preserving soil health as a powerful tool to enhance climate resilience, banning the use of toxic agrichemicals and genetically modified organisms (GMOs) as well as establishing a reward and sanctions system for farmers.