“The current health crisis has roots in the same system that has contributed to the ecological crisis“, commented Vandana Shiva, President of Navdanya International, at the end of two days of discussion and the drafting of the manifesto on “Food for Health”, for which experts from around the world met in Florence, in continuation of the work of the International Commission on the Future of Food and Agriculture. The ecologist and Indian scientist continued by pointing the finger at the industrial agriculture model: “Desertification, climate change, biodiversity loss, water pollution. 75% of today’s ecological problems and new epidemics are related to agrotoxics and fossil fuel agriculture”. Dr Shiva also talked about the issue of integrating systems:”It is important to find alternatives, which are useful for both the planet and the people. “The health of the planet and the health of the people are one. Alternatives do exist and are based on regenerating health of the earth through agro-ecology, conservation of biodiversity, promotion of local economies and food systems “from field to table”. Health, starting with the soil, to plants, animals and humans must be the organizing principle and the aim of agriculture, commerce,  science, of our lives and of international trade.” 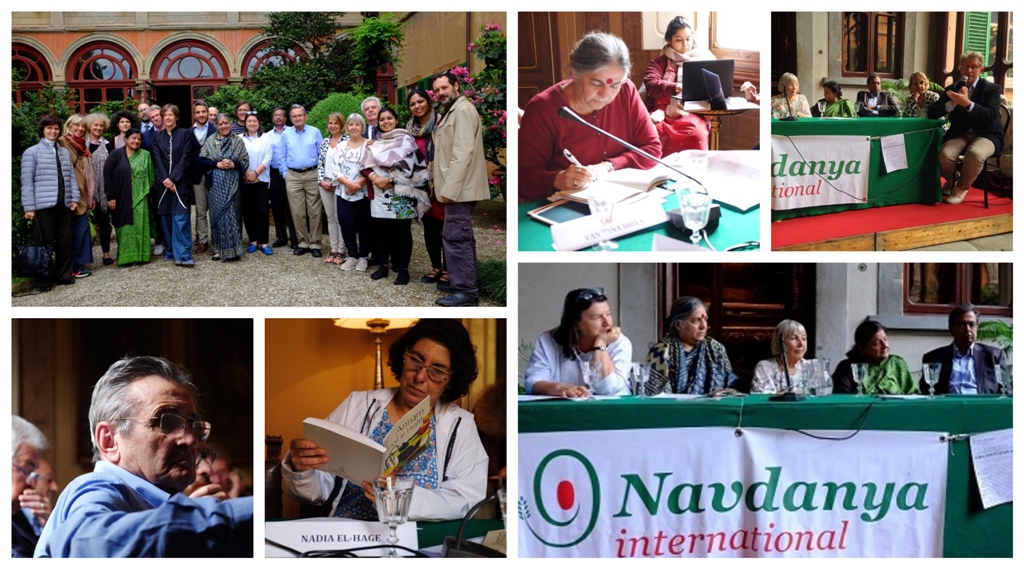 The conference was introduced by Caroline Lockhart, vice president of Navdanya International, who reviewed the steps that led to the establishment of the International Commission for the Future of Food and Agriculture and the drafting of the Food for Health Manifesto. “Since the time  the International Commission on the Future of Food and Agriculture was created, here in Florence, the Commission, through its Manifestos and publications, with Navdanya International, have focused on promoting a new agricultural and economic paradigm, and the belief that solutions to the multiple crises facing humanity today can come from a determined shift away from the present profit and competitive-based  paradigm  to a model that has at its keystone the protection of the earth and environment and respect of the rights and dignity of people. Our times require  adaptation, resilience and critical thinking, and the defence of our democracies and common goods for a brighter and more equitable future for all.”

Experts of the international group gave testimony of their contribution to the drafting of the Manifesto. Hilal Elver, UN Special Rapporteur on the Right to Food, denounced the toxicity of the industrial production system: “It is crucial to achieve real access to the procedures by which decisi ons are made at the institutional level. Are all studies and assessments perhaps related in some way to corporate interest or are they truly independent? It’s a myth that the use of agrochemicals, a market worth some $ 50 billion/year and growing, is necessary to feed the world’s population.” A concept reiterated by Nadia El-Hage, former Environment and Climate Division at FAO: “We need an ecological approach to food and nutrition. We need to promote awareness of the damages caused by the use of chemicals in agriculture “. Also Patrizia Gentilini, oncologist and hematologist, member of ISDE Scientific Committee – International Society of Doctors for the Environment, spoke about the damage suffered by citizens and the environment: “The problem of pesticides is a public health problem. Especially children’s health is at stake. We are seeing an increase in cases of childhood cancers. According to a survey of the International Agency for Research on Cancer (IARC), global numbers have increased from 124 cases per million in children between 0 and 14 years of age in 1980 to 140 cases in 2010. Security levels related to pesticides have been proven totally unreliable, while an economic damage of 194 billion Euro / year is estimated in Europe alone. It has now been demonstrated how an agriculture model that respects and cooperates with nature is the best form of food production, both from the point of view of the quality of food, and of the environmental impact. And that’s why it’s critical that organic farming becomes the only form of food production.” About the problem of pesticides in our food and the need for higher guarantees for health in our diet, spoke Renata Alleva, Specialist in the Science of Nutritition, Department of Biomedical and Neuromotor Science, University of Bologna, member of ISDE Scientific Committee – International Society of Doctors for the Environment,: “Numerous studies have shown that contaminated food exposes us and puts us at risk of developing various diseases. It’s therefore important to promote organic food consumption, which in any case contains less pesticides and, as studies have shown, is richer in polyphenol and antioxidants, on average 20-60% more. If we begin to ask for clean food, and if we startnow, we can be very powerful, and achieve our goals, because we are many more in number than the corporations that poison our food.” One of the objectives of the Manifesto is to raise more awareness on the harm to human health caused by the use of synthetic chemicals in agriculture. As highlighted by Sergio Bernasconi, Professor of Paediatrics at the University of Parma:”The knowledge on endocrine disruptors must come out from academic circles and specialized areas. The current model of food production forces us to nourish ourselves with food that is  dangerous to our health. ” Another important aspect has been analyzed by Mira Shiva, Medical Doctor, Director of the Initiative for Health and Equity in Society – India: “The indiscriminate use of antibiotics in factory farms, which end up in the food chain, causes higher resistance to medicines used by people to treat diseases. There is conflict of interest at different levels. We must overcome the idea that food is a commodity and that citizens are only consumers.”

Of major significance is the system through which our food is cultivated and processed.  Shrinath Reddy, President of the Public Health Foundation of India (PHFI), said: “It is astonishing to think that globally there are people who go hungry and people who suffer from diseases caused by eating excessively and incorrectly. The food production system, besides being characterized by an extreme problem of distribution, is a system that is introducing unsolicited and especially harmful substances in our food.”

The industrial agriculture system and the way in which access to seed is regulated have a fundamental impact on biodiversity. It has been shown that the more our diet is “biodiverse”, the greater are the health benefits, as pointed out by Piero Bevilacqua, historian and writer, Emeritus Professor of Contemporary History at the University La Sapienza – Rome: “the loss of biodiversity in the Mediterranean area has caused a substantial decrease in food plants variety. Industrial agriculture has wiped out a legacy of foods that have fed people for millennia.” Regarding the biodiversity of seeds, Salvatore Ceccarelli, International Expert in Agronomy and Plant Genetics underlined one aspect about which still too little is said: “How can we eat ‘diverse’ foods, when 60% of our calories come from just three plant species i.e. wheat, rice and corn? How can we eat diverse foods if almost all the food we eat is produced from varieties that, in order to be legally traded (i.e. products derived from these seeds can legally be sold in supermarkets), must be listed in the official Register of Varieties, which only recognizes seeds which are ‘distinct, uniform and stable’?” According to Guy D’hallewin, coordinator at CNR – ISPA UOS Sassari, “Intensive agriculture and the use of chemicals have significantly reduced genetic diversity of spontaneous wild plants. This loss of biodiversity has a negative impact on traditional rural knowledge. It ‘s very important to recover for example ancient fruits, also with the aim of preserving local food cultures. Now the global market offers only a limited range of fruit types, from the point of view of genetic diversity. Recent studies have evidenced that several landraces have very high antioxidant properties due to extraordinary levels and chemical variability of polyphenols. In addition, dietary fiber contents are high and total sugars in most fruit is low“. Lucio Cavazzoni, founder of Alce Nero (organic food and products) provided data on the decrease of nutrients in foods today, compared to the past: “Modern grains cause allergies and intolerances that the EU estimates to represent at least 20% of the total. According to a research of ISPRA, the apples of Provence today contain 5% of the vitamins, which were contained in the same apple of 60/100 years ago. We must consider that the food we eat today is depleted food, industrial food. “

On the issue of the right to health and a healthy diet spoke Richard Falk, legal expert and professor emeritus at Princeton University: “Without proper attention to the rights related to health, there cannot be a people-oriented perspective of change. We need to rethink development, encourage the adoption of quality tools. ” It is therefore important that these issues are disseminated in order to raise awareness among the public, as  was stated by Jacopo Orlando, Agronomist, Project Development Manager at ABOCA: “A growing dissemination of knowledge is necessary, in order to inform and educate especially young generations. All the focus today is on the compliance with organic standards, while no attention is given to the lack of compliance with regulations by those who practice conventional farming”. Ruchi Shroff, director of Navdanya International, concluded: “The only possible response to the growing ecological degradation, poverty, health emergency and malnutrition is to move from the present linear and extractive economic and industrial agricultural paradigm based on a one-way extraction of resources and wealth from nature and society, to, instead, a regenerative ecological and nature-based circular approach, aimed at guiding decision makers not only regarding agriculture, but to apply it to all economic and social choices. Ecological organic agriculture and local food systems can lower the ecological footprint and increase human health and wellbeing.”