Since the Russian invasion of Ukraine, the headlines have been dominated by the warning of a food crisis on the horizon. But, according to the FAO, the World Bank, and the International Panel of Experts on Sustainable Food Systems (IPES), there is currently no risk of global food supply shortages.

What is crucially being overlooked by most diagnoses of the current food crisis is how the problem does not lie in a lack of supply, or lack of market integration, but instead in how the food system is structured around power.  Regardless of the adequate global supply, the week of March 7, 2022, food prices reached their highest price spike in history, and many countries are now facing an increased risk of food insecurity, and in worst cases famine.

The current price crisis and incoming hunger crisis is not a symptom of war, but a symptom of a system gone too far.  Excess speculation, increased commodity future pricing and increased volatility in the market, are all behind the crisis. Which mean steep price increases  for the consumer and bigger corporate gains for financial players and big agricultural firms.

It is time to abandon our resource intensive and profit based economic systems that have created havoc in the world, disrupting the planet’s ecosystems and undermining society’s systems of health, justice, and democracy.

The shift from fossil fuel driven corporate globalization to localization of our economies has become an ecological and social imperative.

We must put into practice the international consensus on the need to create an alternative to industrial agriculture and the large-scale distribution model.  The creation of local ecological economies based on “bread labor” and co-creativity with nature is the only way to sustain the earth and human societies through the rejuvenation of real work.

Let us prepare for a Recovery –  through Our Bread Our Freedom Campaign – where the health and wellbeing of all peoples and the planet are at the centre of all government and institutional policy, community building and civic action.

Join the Call – OUR BREAD – OUR FREEDOM

From the 2nd to the 16th of October 2022 (and beyond…), we invite you to organize People’s Assemblies for Our Bread, Our Freedom, wherever you are – in parks, squares, gardens, schools and communities – to reclaim and reshape our food system, and take back our Seed, Food, Democracy and Freedom. Let us celebrate Earth’s biodiversity, our seeds, our soils, our land, our territories, and all sentient beings, and shape a new Earth Democracy based on Living Seed, Living Soil, healthy communities and living economies of care.

LET US HEAR FROM YOU, and write to us – and let us know of your event and/or actions, ideas and work, send us a photos of gardens or terraces, projects and actions in your community, and connect and exchange with others on action around the globe. Contact form

15th October:  Naples initiative – : “Our Bread, Our Freedom‘ – From the squares of the Region of Campania and Italy for a “world of justice and peace“, with Dr Vandana Shiva in a live broadcast from India coordinated by Infinitimondi in collaboration with Navdanya International (More information soon) – Click here  to  join the Naples’ call 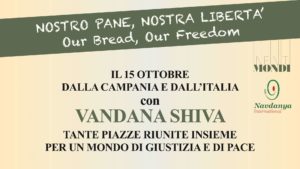 Naples, 15th October: “Our Bread, Our Freedom‘ – From the squares of Campania and Italy for a “world of justice and peace“, with Dr Vandana Shiva in a live broadcast from India coordinated by Infinitimondi in collaboration with Navdanya International (More information soon) – Click here  to  join the Naples’ call

Manifesto on Economies of Care and Earth Democracy

A story :  How Chapati Bread became the symbol of resistance in colonised India under British rule

Chapati is a flat bread made of barley and wheat flour, traditionally baked on a griddle, and is the staple food of India.

The Chapati bread became the first symbol of resistance in 1857 against colonial rule in India some 100 years after the East India Company began to establish its rule by levying taxes in the Northern Territories. The Chapati movement quickly spread throughout India. A messenger would come with a Chapati, deliver it to the village chief, who would prepare a new flat bread and send it on to the next village.  No words or written messages were transmitted, thus preventing the resistance movement from being intercepted, and it spread quickly and silently throughout rural India, with direct intent, from village to village and person to person.

Later, in the early 1900s, Gandhi started the Satyagraha movement of non-violent resistance against unjust laws that led to the liberation from colonial rule and India’s independence in 1947. 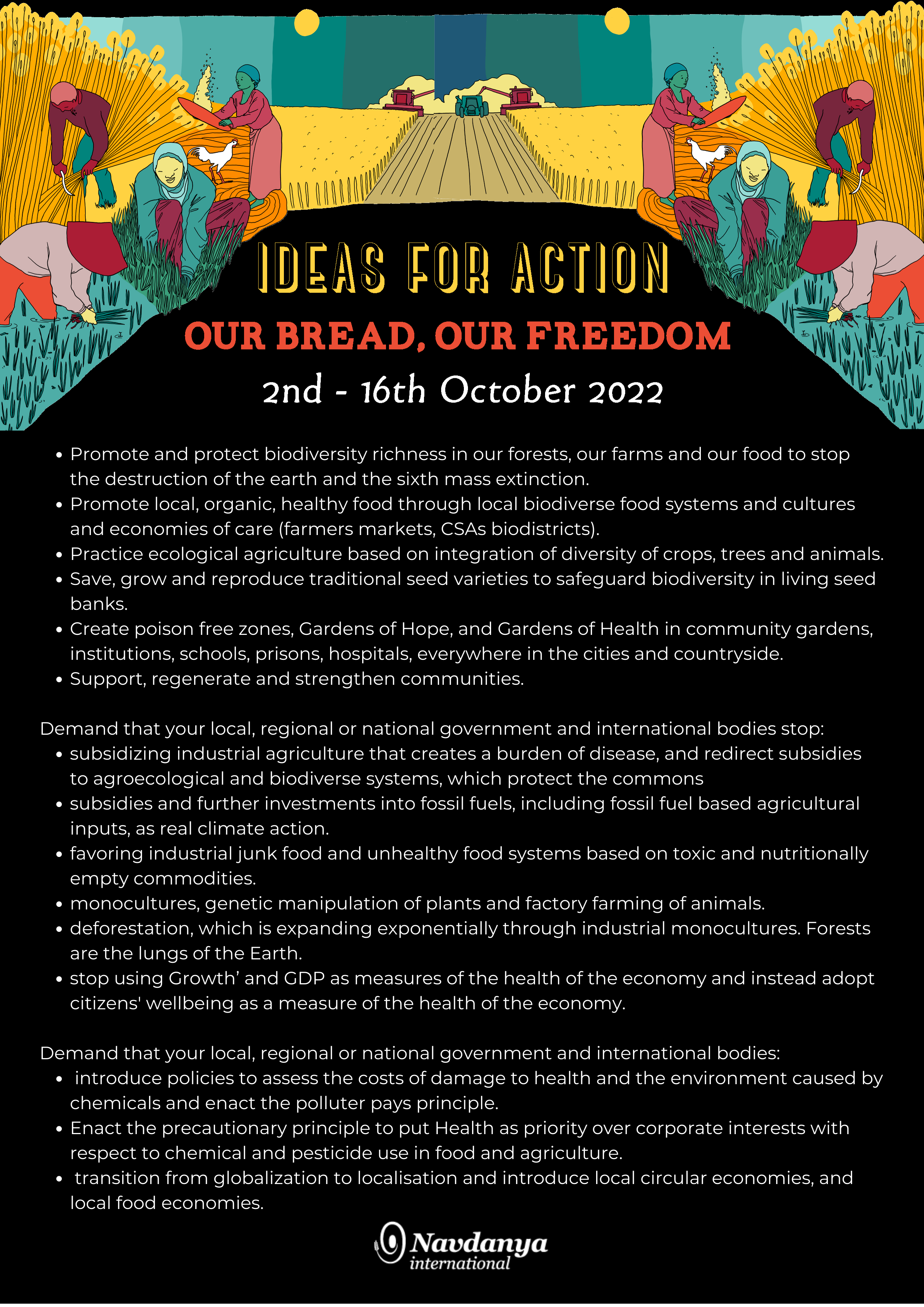