Launch of the European Citizens’ Initiative to #StopGlyphosate

A group of activists gathered this morning in Rome at the Colosseum for the launch of the European Citizen’s Initiative against glyphosate, one of the most widely used herbicide in the world, which was declared “Probably carcinogenic to humans” by the International Agency for Research on Cancer (IARC) of the World Health Organization (WHO) in 2015. Although it has recently been forbidden, it is still widely used in agriculture and many public areas, resulting in residues in food and water.

Activists with banners and placards for a pesticide-free model of agriculture also offered “glyphosate-free” apples to people who stopped at the table to add their signature. Similar initiatives have taken place across Europe, in Berlin, Madrid, Brussels, Paris, to name a few. 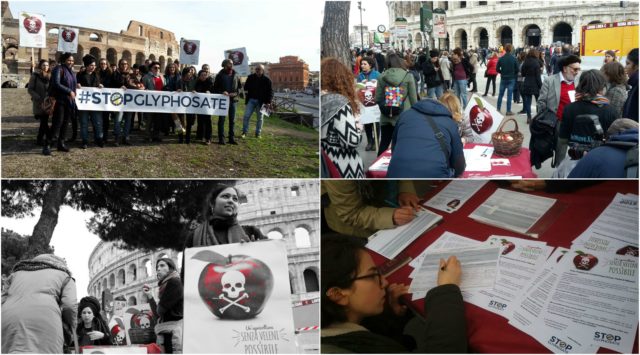 A Widespread social opposition against Glyphosate has been ongoing over the last years and this coalition of citizens’ movements is asking the European Commission to finally hear their voice.

The Initiative’s promoters are also denouncing the lack of transparency in Pesticides Approval European procedures, which, often, are based on private studies funded by manufacturers, the content of which remains confidential. For this reason the European Citizens’ Initiative (ECI) demands the EU to reform its procedures which must be based solely on published independent studies commissioned by competent public authorities. It also demands the EU to fix required reduction targets of amounts of pesticides use in its member countries.

This wide pan-European coalition of NGOs, associations, networks and social movements must reach the goal of collecting at least one million signatures in one year, but the real deadline for the political success of the campaign actually is summer 2017 so that the process is completed before the EU Commission expresses itself on the extension of the current resolution for the use of glyphosate in Europe.

This citizens’ request to ban glyphosate also aims to focus the attention of European Institutions on a new model of poison-free agriculture, based on health rights and farmers’ rights instead of corporate profits.

European citizens can sign the ECI through www.stopglyphosate.org, where they can find useful information and download signatures forms in all European languages, based on an innovative open-source software for collecting online signatures (openECI).

Navdanya strongly denounces the Poison Cartel, a handful of multinational corporations with roots in war, like Monsanto, Bayer, Syngenta, Dupont, etc, which have poisoned millions of people, destroyed biodiversity, pushed small farmers off their land, and attempted to take over every aspect of our life as we know it. The potential of this harm is also increasing as these corporations are becoming fewer and bigger. Using free trade neoliberal policies and deregulation of commerce to enlarge their empires, these corporations are attacking life on earth and biodiversity. They have broadened their control over our seed, our food and freedom, robbing us of our human rights and democracy. They have established monopolies and threatened farmers rights to seed and people’s rights to affordable medicine through patents and IPRs.

In October 2016, Navdanya co-organised the Monsanto Tribunal and People’s Assembly at The Hague to make these corporations accountable for their crimes against humanity.