The Nitrogen Problem in Agriculture:

Reduce the use of chemical fertilisers, make the chemical industry pay for pollution instead of criminalising farmers who were trapped by in the chemical treadmill  through industrial agriculture

Nitrogen fertilisers also emit a greenhouse gas, N2O, which is 300 times more destabilising for the Climate System than CO2. 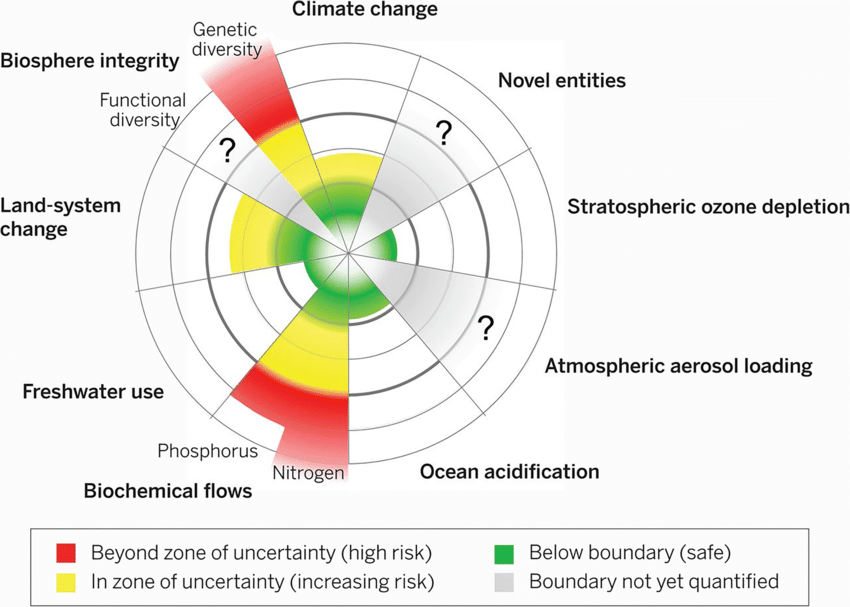 The linear extractive agriculture system based on fossil fuels is rupturing ecological processes and planetary boundaries. The 3 planetary boundaries that have been transgressed to a danger zone are Biodiversity and nitrogen pollution from chemical fertilisers. The most severe violations of planetary boundaries is due to fossil fuel, chemical intensive industrial globalised agriculture -the disruption of Biodiversity Integrity and Genetic Diversity leading to biodiversity loss and species extinction and the biochemical nitrogen and phosphorus cycles caused by large scale monocultures and large scale use of chemical pesticides Erosion of genetic diversity and the transgression of the nitrogen boundary have already crossed catastrophic levels. All three overshoots are rooted in the chemical intensive, fossil fuel intensive industrial model of agriculture. 93% of cultivated crops have disappeared.

The unscientific, unjust, and undemocratic response to the chemical industry created nitrogen problem is to reduce farmers instead of reducing dependence on chemical fertilisers as is happening in the Netherlands. [3]

To reduce chemical fertiliser use, governments need to make the fertiliser industry pay for nitrogen pollution, and redirect subsidies from industrial agriculture to ecological farming. Criminalising farmers for the crimes of the chemical industry is unfair and unjust. We need more farmers, not less, to regenerate the earth through an economy of care and belonging, and to produce real food which regenerates the health of the planet and our health.

There is a dystopian vision of a future of “Farming with farmers”, a digital agriculture with larger farms, more fertiliser use, more biodiversity loss.

While creating “Farming without Farmers” billionaires like Bill Gates are promoting more synthetic fertiliser use, aggravating the nitrogen problem.

Gates is promoting nitrogen fertilisers and chemical intensive GMO soya as raw material for  lab made fake food which is being labelled as “plant based”. [4] 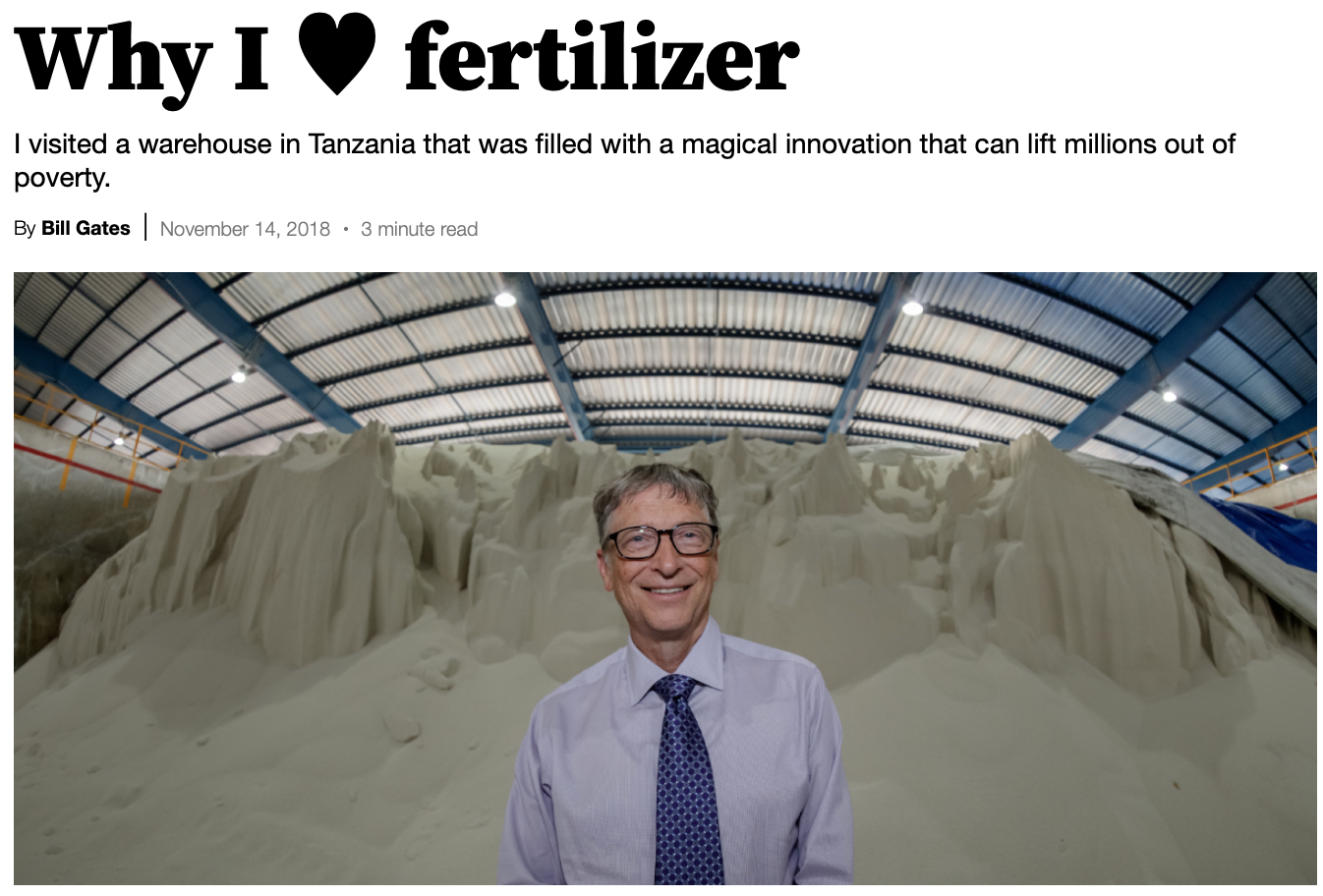 The billionaire recipe is to have larger chemical intensive monoculture artificially fertilised by synthetic nitrogen fertilisers, which will emit nitrous oxide, a greenhouse Gas.

In total denial of climate science and the soil ecology, Gates is continuing the “chemical hocus pocus” when he says we need to use more fertiliser.

“To grow crops, you want tons of nitrogen-way more than you would ever find in a natural setting. Adding nitrogen is how you get corn to grow 19 feet tall and produce enormous quantities of seed”[5]

This statement is scientifically and ecologically false.

Soil is a living system. There are multiple pathways to regenerate the Soil and Soil Nitrogen and heal the nitrogen cycle.

The living soil was forgotten for an entire century with very high costs to nature and society. Soil was defined as an “empty container” for pouring synthetic fertilisers into, which were falsely seen as the source of soil fertility. “Bread from air” was the slogan after the discovery of the Haber Bosch process for fixing atmospheric nitrogen by burning fossil fuels. The illusion grew that we did not need soil.

There was the exaggerated claim that artificial fertilisers would increase food production and remove all ecological limits that land puts on agriculture. Today the evidence is growing that artificial fertilisers have reduced soil fertility and food production and contributed to desertification, water scarcity and climate change. They have created dead zones in the oceans.

Justus von Liebig was the father of organic chemistry, the first scientist to explain the role of nitrogen in plants, which was quickly appropriated by greed for commerce. A new industry was created for external inputs of nitrogen, dubbed as “growth stimulants”. Outraged at the distortion of his scientific findings, in 1861 wrote a book, ”The Search for Agricultural Recycling”.

Liebig’s book was the voice of a true scientist, protecting his truth from distortions of a pseudo-science being created by commercial interests. As he writes “I thought it would be enough to just announce and spread the truth as is customary in science. I finally came to understand that this wasn’t right, and the altars of lies must be destroyed if we wish to give truth a fair chance.” The truth that Liebig was defending was that the soil is living, and its life depends on recycling, or what Sir Albert Howard later called “The Law of Return” in his “An Agricultural Testament” nearly half a century later. The lie he wanted to destroy was what he called the “chemical hocus pocus”, that you can keep extracting nutrients from the soil, giving nothing back, and have “high yields”.

Selling more fertilisers is good for the profits of the chemical industry, but it is not good for the soil or the climate. It violates nature’s law of return. And it denies farmers the ecological alternatives to regenerate and renew soil nitrogen.

Farmers did not create the nitrogen problem. The problem is created by the chemical industry. According to the Polluter pays principle, the chemical industry must pay for the pollution. Farmers are consumers of fertilisers, not the manufacturers. They are victims of a chemical intensive industrial agriculture system, like the biodiversity of plants, and animals, and the consumers whose health is degenerating with industrial food style chronic diseases. The planet and people need more farmers, not less.

Sacrificing farmers pretending to address the nitrogen problem is dishonest because it blames the farmers for a problem created by the chemical industry. It is dishonest and inconsistent to say farms and farms must be reduced while continuing to promote the use of chemical fertilisers as Gates, the Chemical Industry and governments are doing.

While the chemical industry has spread the myth that chemical fertilisers are necessary for food production and address hunger, they have destroyed biodiversity by promoting monoculture, and they have contributed to desertification of soil by destroying the biodiversity of living soil. The destruction of soil organic matter destroys the capacity of soil to conserve moisture, thereby creating the need for intensive irrigation, and therefore further disrupting the nitrogen and phosphorus cycles.

Our practice and research at Navdanya over the last two decades shows the regenerative ecological agriculture builds up soil nitrogen, while synthetic fertilisers deplete it. [6] 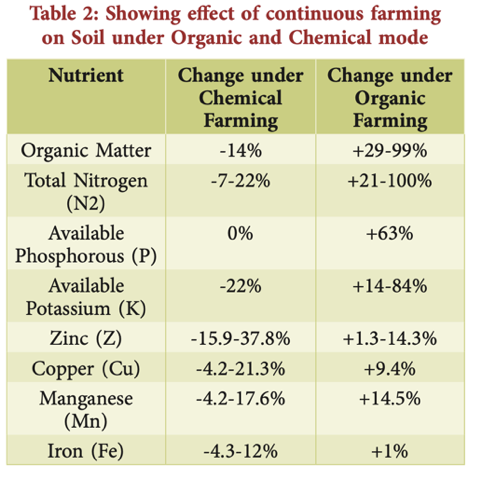 Reducing fertiliser use does not reduce yields.[7]

Fertiliser response has dramatically reduced. Sharma and Sharma (2009) mentioned about the declining fertiliser response for the last thirty years from 13. 4 kg grain kg nutrient in 1970 to 3. 7 kg grain kg nutrient in 2005 in irrigated areas. According to Biswas and Sharma (2008) while only 54 kg NPK / ha was required to produce around 2 t /ha in 1970, around 218 kg NPK/ha was used in 2005 to sustain the same yield.

Since synthetic fertilisers are fossil fuel based, they contribute to the disruption of the carbon cycle. But they also disrupt the nitrogen cycle. And they disrupt the hydrological cycle, both because chemical agriculture needs ten times more water to produce the same amount of food than organic farming, and it pollutes the water in rivers and oceans.

Returning organic matter to the soil builds up soil nitrogen. A recent study we are undertaking shows that organic farming has increased nitrogen content of soil between 44-144 %, depending on the crops.

Since war expertise does not provide expertise about how plants work, how the soil works, how ecological processes work, the potential of biodiversity and or- ganic farming was totally ignored by the militarised model of industrial agriculture. [9]

To address the nitrogen problem, we need to bring back biodiversity in farming.

Farming did not begin with the green revolution and synthetic nitrogen fertilisers. Whether it is the diversity based systems of India-Navdanya, Baranaja, or the three sisters planted by the first nations in North America, or the ancient Milpa system of Mexico, beans and pulses were vital to indigenous agroecological systems.

“Mixed crops are the rule. In this respect the cultivators of the Orient have followed Nature’s method as seen in the primeval forest. Mixed cropping is perhaps most universal when the cereal crop is the main constituent. Crops like millets, wheat, barley, and maize are mixed with an appropriate subsidiary pulse, sometimes a species that ripens much later than the cereal. The pigeon pea (cajanusindicus), perhaps the most important leguminous crop of the Gangetic alluvium, is grown either with millets or with maize. . . Leguminous plants are common. Although it was not until 1888, after a protracted controversy lasting thirty years, that Western science finally accepted as proved the important role played by pulse crops in enriching the soil, centuries of experience had taught the peasants of the east the same lesson.”[10]

Vegetable protein from pulses is also at the heart of a balanced, nutritious diet for humans. The Benevolent Bean is central to the Mediterranean diet. India’s food culture is based on “dal roti” and “dal chawal”. Urad, moong, masoor, chana, rajma, tur, lobia, gahat have been our staples. India was the largest producer of pulses in the world. And our proteins are rich in nutrition, delicious in taste.

Pulses have been displaced by the Green Revolution monoculture, and now the spread of monocultures of Bt cotton.

The nitrogen problem due to synthetic nitrogen fertilisers is real. Uprooting farmers is a false, violent, unjust solution. Governments that have subsidised and promoted the fertiliser industry now need to shift public tax money to regenerative agroecology that is chemical free. New Agroecology schools need to be open for farmers to make a transition to ecological agriculture over a 3–5-year period. We need democratic debates on the use of public money to serve the public good, not private greed. Since how we grow our food impacts our health and the health of the planet, growers and eaters of food need to join hands to regenerate the health of the soil and communities.

The Living Soil is the answer to the Nitrogen problem. To regenerate living soil, we need regenerators. Farmers are the custodians and caretakers of the land. We need to create a new culture of Earth Care in agriculture. Getting rid of farmers is an extinction and extermination project which has no place in free, democratic just societies.