The Earth is Living. She is Gaia, Pachamama, Vasundhara, Terra Madre. For indigenous cultures she is Mother Earth. Even scientists like James Lovelock call her Gaia because they have understood that she is living. The living Earth is a biological self organised self-regulated living system. She is autopoietic. She has evolved her biodiversity and her complex biosphere over billions of years.  Through the biosphere she creates and regulates her climate systems. The Earth’s living systems, the “Gaian system”, self-regulates global temperature, atmospheric content, ocean salinity, thus maintaining the infrastructure for life to persist and evolve.

Without life, the CO2 in the earth’s atmosphere was 98%, and the temperature 290 degrees centigrade. Over 3.3 billion years, the earth has been cooled by her living systems. The process of photosynthesis allows living organisms, first microbes and later plants, to capture the sunlight and the carbon dioxide in the atmosphere. This is nature’s sophisticated “carbon capture” technology which allowed carbon recycling with the limitless energy from the sun, transforming CO2 to O2. CO2 levels were brought down to 0.03% by living organisms, and average temperature was brought down to 13. Oxygen accumulated in the atmosphere and the earth was transformed from the original heat-trapping CO2 rich atmosphere to the reduced CO2 atmosphere through the oxidising process of plants and living organisms. This allowed temperatures to be regulated at levels that support human and other biological life on earth.

The same process that cooled the planet and allowed life to emerge in its diversity are living processes and living technologies that sustain, maintain, and regenerate life and create living economies.

Climate Change is the Disruption of the earth’s Self Regulatory Processes by using junk fossil energy-coal, oil, gas- that the earth had fossilised over 600 million years and put underground. The Climate Emergency and related emergencies are rooted in  the colonising of the Earth, her ecosystems resources, and her diverse cultures. It is a worldview shift  from Terra Madre, the Living Earth, to Terra Nullius, the dead and empty earth. The same world view shift that declared indigenous peoples as inferior and created apartheid, also declared the Earth as dead, created barriers between humans and the earth through the illusion of Eco Apartheid. The world view that creates hierarchies between people  and divides humanity on the basis of race, gender, religion, class, also creates the false hierarchy of anthropocentrism treating our earth relatives as inferior, mere objects to be owned and manipulated. The  false assumption  that the earth is dead inert matter has made the vibrant, biodiverse living earth disappear and reduced her to a mine for “raw materials” for an inefficient and wasteful corporate, industrial system, and a sink of industrial  pollution.

The Dead Earth view leads to the artificial imposition of a fictitious “Creation Boundary” – that creation begins with extraction, exploitation and manipulation of the earth’s resources. The Dead Earth worldview is connected to the technological paradigm that is blind to nature’s superior and sophisticated living technologies. Genetic engineering, climate engineering, geo-engineering, carbon engineering are based on a deep denialism- the denial that the earth is living. Her technologies of organising, regenerating and renewing life are complex, and our instruments of engineering are crude and clumsy when compared to her sophistication, subtlety, and lightness. The Dead Earth view is also connected to an extractive economic system that  imposes a fictitious “production boundary” that makes nature’s creative and productive processes disappear, appropriates what nature and people have co-produced, and  that are inefficient, use more resources and energy than they produce, and increase entropy. The dominant economic model is based on extractivism, dependence on external inputs, external control, allopeisis, and externalisation of the high financial and entropic costs. It is based on denialism of nature’s zero cost, zero external input, negative entropy, high efficiency systems of  living economies of creating abundance through multi functionality and multiple outputs.

Real Climate Solutions lie in working non-violently with the Earth, her Biodiversity of plants and Soil Organisms, her ecological technologies, her living economies.

False Solutions continue the path of separation and superiority, greed and control, profits and power, manipulation and mastery, that have caused an existential emergency for our species.

We are members of one Earth Family and part of the web of life woven by biodiversity. We cannot and do not live outside the food web and the web of life. Every illusion of separation and superiority, mastery and control ruptures the fragile web and ecological cycles which sustain life on earth. The arrogance that nature has no creativity and only humans are intelligent is a flawed, obsolete, colonial worldview that has no place in a regenerative world.

In total denial of the power and potential of plants and living soil to recycle carbon and cool the planet, the money makers and profiteers are trying to set up a “Carbon Capture and Storage” industry to continue to pollute while making more money from a new pollution industry. Just as all wasteful, socially and ecologically destructive industry such as fossil industrialism, Green Revolution/industrial agriculture, factory farming that are violent, non-sustainable, financially unviable have been made artificially profitable for corporations at the cost of planet and people through subsidies, the industrial Carbon Capture and Storage Technologies can only exist through massive public subsidies and a continued denialism of the more sophisticated technologies that nature offers.

Even the IPCC is falling for the industrial carbon capture trap:

“The IPCC report says that without capturing significant amounts of carbon over the next 30 years, it will be impossible to get humanity to net-zero emissions by 2050 – and, consequently, to limit warming to 1.5 degrees Celsius.”[2]

The reason billionaires are investing in inefficient, nature denying, costly and false solutions to climate change is because it lets the fossil fuel industry continue to pollute while they collect our tax money to be invested in false solutions and create new markets in carbon trade and the fake economy of “net zero”. The US Senate’s infrastructure bill would allocate $3.5 billion toward direct air capture facilities in the US.[3]

Public taxes and public investment needs to go to protect the common public good, regenerate the planet’s plant and soil biodiversity, and through it cool the planet while providing  food and livelihood security through local living circular economies.

The corporations and billionaires are hijacking our public resources, public money, public institutions to lubricate and perpetuate their greed machine.

They are manipulating the UN and governments to demand that people’s tax money be used to create new avenues for building the inefficient, wasteful, centralised, energy intensive industrial infrastructure of “carbon capture” for profits instead of regeneration of the distributed, decentralised living technologies of the infrastructure of life everywhere, in every ecosystem and community, across our forests, grasslands, coasts and farms.

The world’s biggest industrial carbon capture industry named Orca was set up by a Swiss Company Climeworks in Iceland. It is highly inefficient. Over one year it will capture just 3 seconds of global emissions.[4]

Christoph Gebald of  Climeworks’ co-founder which set up the Orca plant admits it is a costly and energy intensive technology, costing at least $600 to capture one  metric ton of carbon dioxide.[5]

Removing all of humanity’s annual carbon emissions would cost more than $5 trillion per year, according to Gates’ book, “How to Avoid a Climate Disaster.” Gates admits “It’s probably the most expensive solution”. It would require 50,000 Orca plants. And still not perform the ecological functions of living carbon in plants and living soil.

While knowing the financial non viability of industrial carbon capture, Gates is investing in the Canadian company Carbon Engineering[6], which has started designing a similar facility as ORCA in northeastern Scotland[7] and plans to start construction on a plant in Texas next year.[8]

Climeworks hopes that the price can be dropped to $100 by selling carbon commercially  to beverage companies making fizzy drinks. This is a recipe for obesity, diabetes, chronic diseases and aggravating the health emergency. It will make more people sick without healing the planet.

The mechanical mindset of Industrial Carbon Capture and the denial of the Earth’s capacity to absorb and recycle carbon dioxide to create and regenerate life is evident in the statement of Julio Friedmann, an energy policy researcher at Columbia University who describes industrial carbon capture as follows-

“Think of it like a vacuum cleaner for the atmosphere… Nothing else can do what this tech does.”[10]

He forgot the living earth’s technology of photosynthesis in the green leaf does a better, more sophisticated job. Nature recycles carbon for free, creates the food and fibre that sustains us, creates living soil which grows life and store’s water to regenerate our springs, streams, wells and rivers.

We are witnessing a clash of civilisations, of world views, of technology paradigms, and economic systems.

On the one hand we have the colonising industrial world view that the earth is dead and imperfect. She can be engineered for profits and control. And the expensive engineering experiments and technological fixes will fix Mother Earth. And for this the billionaires need to divert our public resources to bad ideas so they can make more money while the planet burns.

David Keith, Professor of Physics and Public Policy at Harvard University and founder of Carbon Engineering, a company developing technology “to capture CO2 from ambient air to make carbon-neutral hydrocarbon fuels”. published a commentary article in the New York Times titled “What is the Least Bad Way to Cool the Planet?”.[11]

On the other hand we have the ecological world view that the earth is living, we are part of her, not her masters, and working with her we can regenerate her green mantle so she continues to cool the planet as she has done over millennia.

Each and every one of us has to decide which worldview, which technology paradigm, which economic system we will support and participate in, in our minds, our lives and our participation in citizen democracy and Earth Democracy. 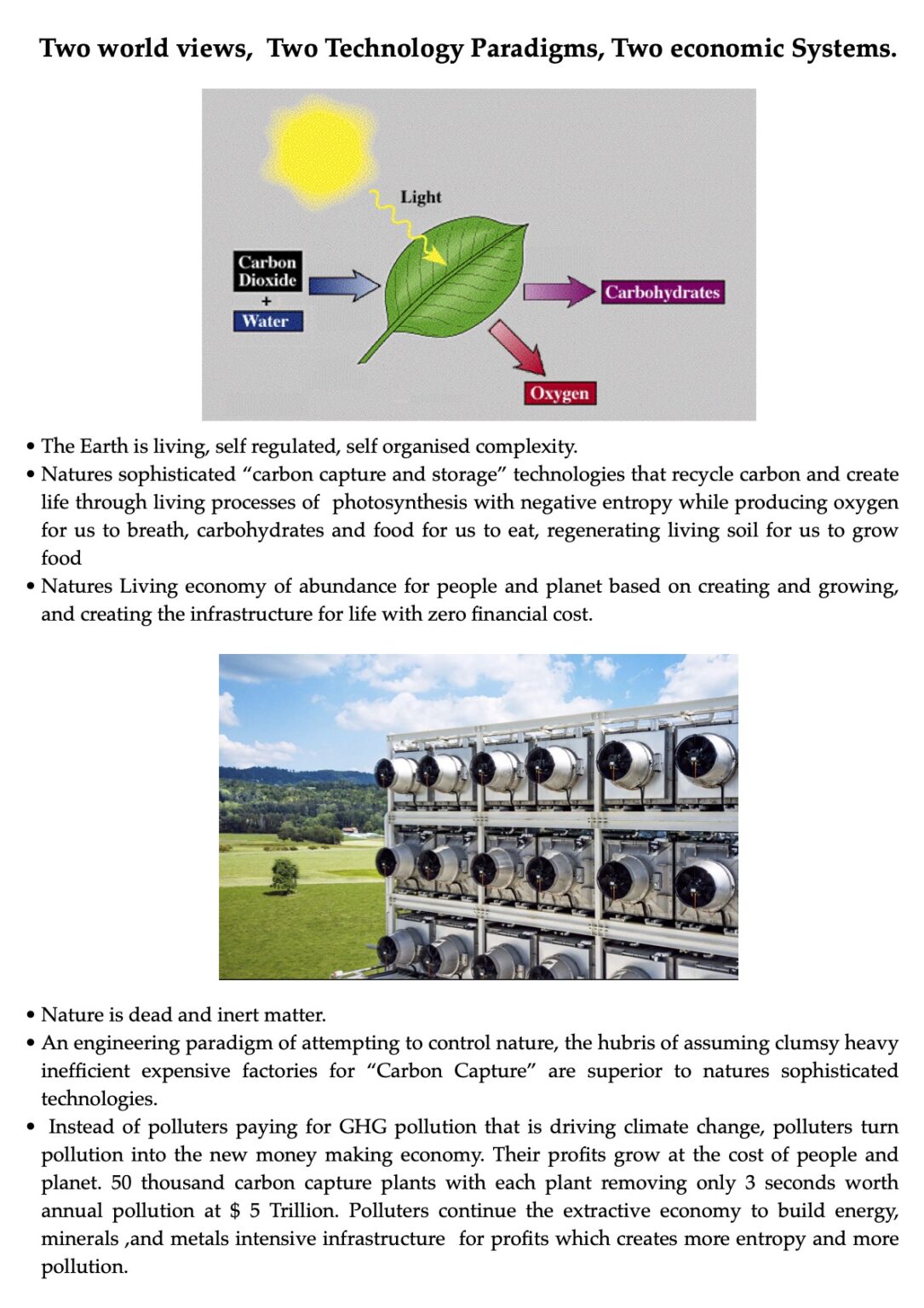 [2] Woodward, Aylin, and Morgan McFall-Johnsen. ‘The Amount of Warming That World Leaders Collectively Agreed to Avoid? It’s Inevitable in the next 20 Years, a New Report Suggests.’ Business Insider, 9 Aug. 2021, https://www.businessinsider.com/climate-ipcc-report-temperature-rise-20-years-15-degrees-2021-8

[9] Sonnemaker, Tyler. ‘Elon Musk Says He Will Give $100 Million to Whoever Creates the Best Carbon-Capture Technology’. Business Insider, https://www.businessinsider.com/elon-musk-100-million-prize-carbon-capture-technology-contest-2021-1