On the 28th and the 29th of April, Florence will be hosting the Seed, Food and Earth Democracy Festival, with Vandana Shiva for a new economy.

The Festival is one of the stages of the “Seed Caravan”, a traveling event to bring to the attention of Europe the voices of those who want their agriculture to be free of poisons and GMOs and in favour of local seeds and biodiversity.

For many years now, Navdanya International has been working on the “Global Campaign for Seed Freedom”, aiming to increase both government and public awareness of the importance of defending local seed, a commons, and therefore free from patents and monopolies of multinational companies.

Sponsored by Seed Freedom, Navdanya International and la Fierucola, and with the Patronage of the Regione Toscana, this event is open to all associations and institutions working on seed, food and for the promotion of Earth Democracy. The programme has been thought out keeping everyone in mind, from children to producers. Already, more than 20 associations have signed up. 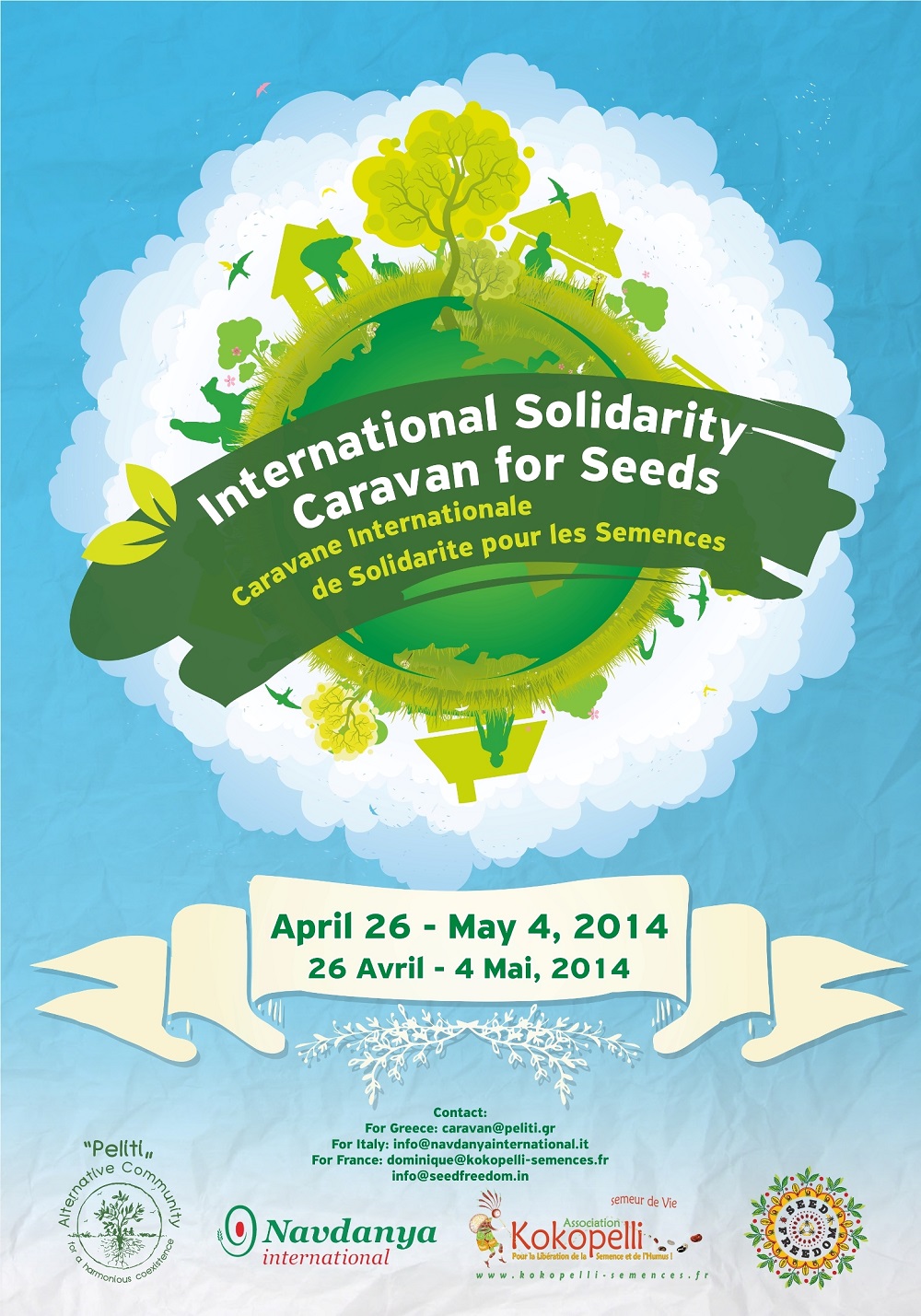 The Festival will begin at the Orto Botanico, Florence’s historic botanical garden with the conferring of the care of the seed to school children and youth by Vandana Shiva and farmer-custodians followed by a joint signing of a  “Pledge” of the children  and young adults. The handing-over of seeds by the farmer-custodians is a symbolic gesture which recalls the age-old tradition of the handing-down and sharing of knowledge.

The Festival will be held in Piazza Santissima Annunziata in the heart of Florence. People will be able to meet, take part in debates, participate in workshops, enjoy the market of La Fierucola with its country-market stalls allowing the exchange, as well as the sale, of farm-fresh, homegrown and homemade produce.  There will be much music.

At 17:30 – “Land, a common good”, a meeting with the movement “Verso Mondeggi-Bene Comune”

At 10:00 – Welcome speech for children, given by the Orto Botanico and Orti Dipinti (activities and workshops held in the vegetable garden of Orti Dipinti)

At 11:00 – The signing of the Pledge between the children, Vandana Shiva and the farmer-custodians.

At 11:00 – The market opens at 12:30 Presentation of the Festival with Vandana Shiva

During the afternoon: Various talks on stage with intervals of music and theatre

At 15:30 – Beneath the Loggia, a workshop on seed for children and young adults

At 14:30 – Open meeting with Associations and movements concerned with seed, food and access to the Soil, to debate and share strategies for the future and to strengthen the movement for Seed Freedom, Food Freedom and Earth Democracy.

At 17:00 – “Seeds of Culture”, meeting with Regione Toscana, Banca Popolare Etica, Navdanya International and the partners of Terra Futura

The Festival is organised by Seed freedom, Navdanya International and La Fierucola, with the patronage of Regione Toscana and Banca Popolare Etica.

Other European associations will be present, some amongst them being Demeter, Red de Semillas, Arche Noah, Open House and more still signing up. 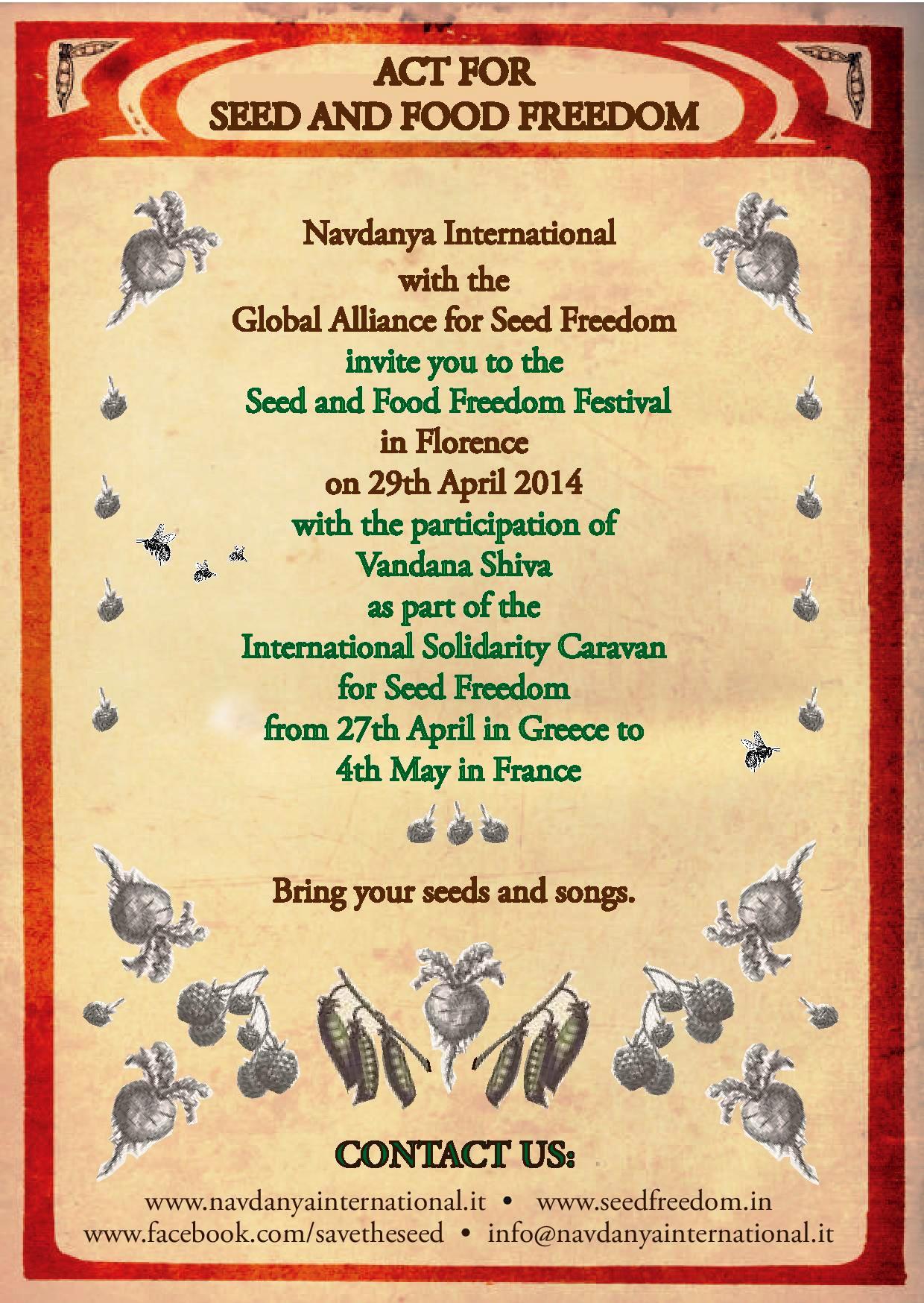