On  June 3rd in Naples, on the occasion of the Berlingueriana event, a debate was held, on the themes of Dr. Vandana Shiva’s latest book From Greed to Care – The necessary revolution for a sustainable economy (Dall’avidità alla cura – La rivoluzione necessaria per un’economia sostenibile – Emi). The debate featured Arturo Scotto, Fulvia Bandoli, Piero Bevilacqua, and Alberto Capasso. From the discussion it emerged how caring for the democracy of the Earth represents the decisive challenge to save the ecosystem and the food sovereignty of peoples. The authentic meaning of economy as ‘care for the common home’ needs to be recovered, in opposition to the current extractive paradigm aimed solely at profit. This requires a revolution in the way we produce and consume. 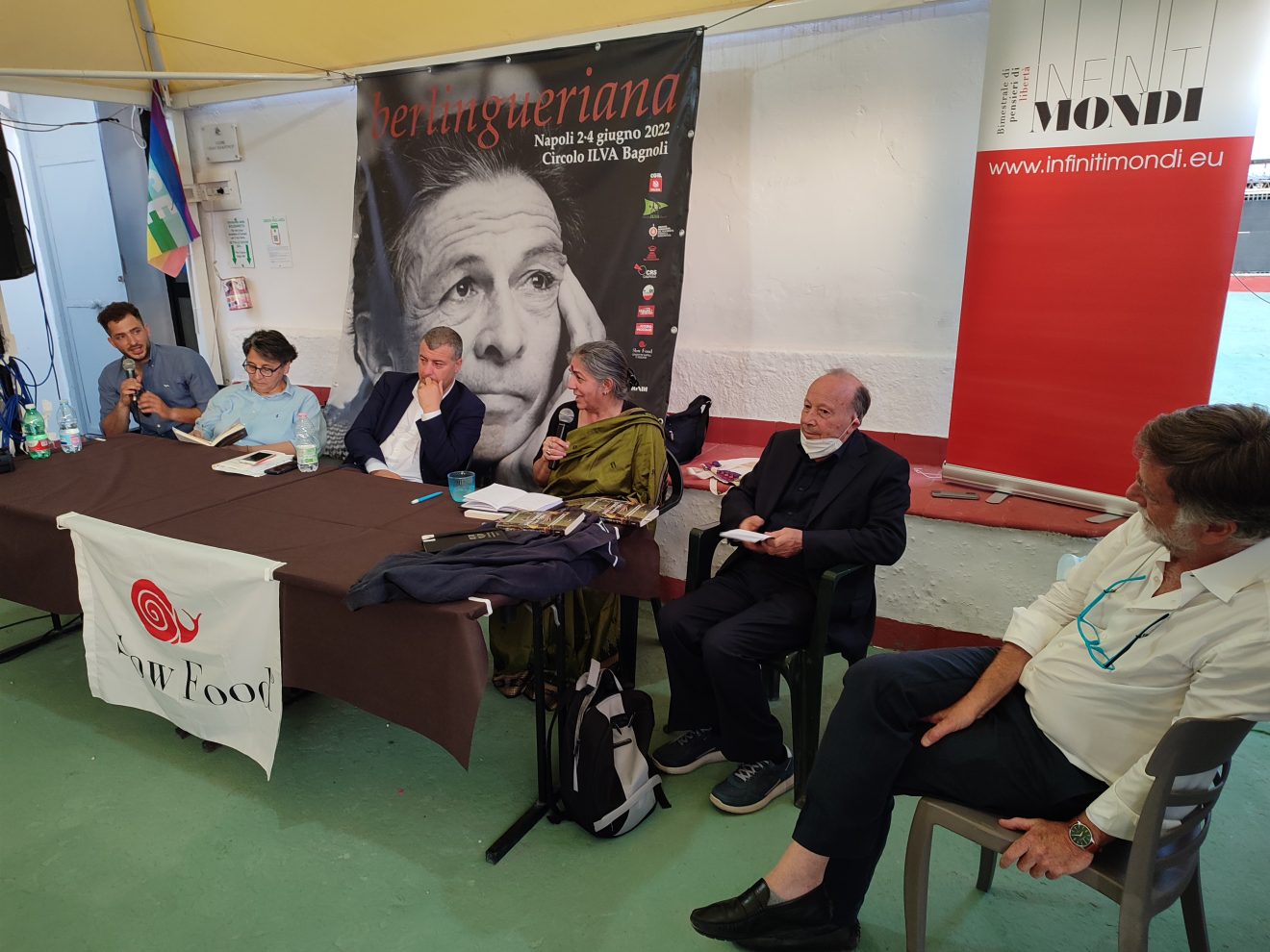 The event ‘Deep Ecology and Regenerative Agriculture‘, held in Rome on June 6 and organised by the Italian Buddhist Union (UBI) and Navdanya International, in collaboration with the Rome City Council, outlined the foundations of a programme that intends, first and foremost, to promote a cultural campaign. Learning the true value of ecology, and protecting all the levels of biodiversity on our planet, is the first step towards the necessary transformation of the current industrial production and distribution systems. Especially as, according to major reports, are largely responsible for the current environmental and health crises.

«We must remember what life is all about. We have become distracted and, over the course of a few decades, everything has been objectified and commodified. We must reject the systematic attack on knowledge systems, what I call Epistemicide,” stated Dr. Vandana Shiva during the presentation of the partnership between the two organisations. She recalled how all living species, including humans, are interconnected, but this connection is in grave danger.  «The ongoing war against the Earth is based on fear of the living. It has taken a lot of violence to silence the knowledge about the living. Food connects us all and that is why we must stop considering farmers as mere producers. Agriculture”, concluded the Indian activist, “is care for the Earth and farmers are its custodians and those who know how to regenerate it.” (Video)

Following the institutional greetings of Pierluigi Sanna, Deputy Metropolitan Mayor, were the following speakers: Davide Marino, Italian Network of Local Food Policies; Lucio Cavazzoni, President of Goodland; Rosa Vaglio, President of Diritti a Sud; Nicoletta Dentico, Director of the Global Health Programme, Society for International Development; Grazia Francescato, former WWF Italy Leader and Spokesperson for the European Greens; and Silvia Francescon, Head of the Ecology Agenda, Italian Buddhist Union. Concluding the conference were the remarks of Stefano Bettera, UBI Communications Officer, who emphasised how care and interdependence are at the root of the Buddhist message. «The Earth is going through a crisis with no precedent in history. We are all called to play a part: in the face of this global emergency, even religious groups must enter the debate and provide answers and useful tools to save our common home. We can no longer stand still: now is the time to act, to come forward and work together, because what we have in our hands is a global responsibility, both for us who live on this planet today and for those who will follow in our footsteps tomorrow”. (Photos). For the occasion of World Environment Day, Dr. Vandana Shiva also launched a Manifesto on Economies of Care and Earth Democracy, during this event.

In Florence, on June 7, Dr. Vandana Shiva presented her latest book From Greed to Care – The necessary revolution for a sustainable economy (Dall’avidità alla cura – La rivoluzione necessaria per un’economia sostenibile – Emi). The launch took place at the Sibilla Aleramo conference hall in collaboration with the Library ‘Biblioteca delle Oblate’ and the City of Florence, together with Nadia El-Hage and Gloria Germani, philosopher and writer. Vandana Shiva remarked: «I wrote this book ‘From Greed to Care’ because if we do not act in this sense, soon 90% of people will be considered disposable. The current path of humanity is clearly not sustainable, as it is destroying life on Earth. The non-sustainability and multiple emergencies that are endangering the very infrastructure of life are increasingly threatening the survival of the human species. Humans are also a threatened species, like any other. A future for all life on Earth and for all people can only come from care. Greed does not leave enough ecological space for all, while care amplifies our capacity to live together. Therefore, care is the revolution of our times”.

A meeting with the title ‘Agriculture and Freedom‘ took place in Florence on June 8, with Carlo Triarico, president of the Italian Association for Biodynamic Agriculture, and Nadia El-Hage. During the debate, the attacks on biodynamic agriculture, which has recently taken place in Italy, were discussed. Dr. Vandana Shiva emphasised how, also in this case, the importance of care has been lost sight of. Biodynamic agriculture actually takes care of the seed, it takes care of the soil, it takes care of the farmers. The economy of care is the only possible future for the sustainability of agri-food systems, because it creates abundance and life for soils, plants, animals and humans. A Memorandum of Understanding was signed between Navdanya International and the Association for Biodynamic Agriculture through which all farmers who want to co-design the future of caring for the planet are called to join forces.

In Turin, on 9 June, on the occasion of Cinemambiente film festival, a lively discussion on the topic “The Earth against the War” took place, between Dr. Vandana Shiva and Don Luigi Ciotti, president of Gruppo Abele, Libera and Casacomune, and presided by Lucio Cavazzoni, president of Good Land.

On June 10, the ‘Women and the Climate Crisis’ Round Table organised by Casacomune took place. Dr. Vandana Shiva spoke on the theme “Free Seeds: beyond the chains of economy and finance for the freedom of the world”. Together with Dr. Vandana Shiva, Eleonora Evi, Anna Brambilla, Isabella Pratesi, Suzanne Mbiye Diku, Michela Favaro, Mirta Da Pra, Don Luigi Ciotti and the founder and artistic director of Cinemambiente, Gaetano Capizzi.  (Video).

On June 11, in the Jardin De Brantes in Sorgues, France, the public launch of “Mothers’ Gardens” collective project by AMMAR Seeds took place, inaugurated by Dr Vandana Shiva, with Bela Gil, Brazilian chef and activist, and Jean-Michel Florin, coordinator of the French biodynamic movement (Mouvement d’Agriculture Bio-Dynamique) and co-leader of the Biodynamic Section at the Goetheanum in Switzerland. Dr Vandana Shiva also visited the Steinhardt Schools biodynamic garden, cared for by the students in the neighbourhood. The 2-day event was the last slot of this tour on the issue of care and preservation of biodiversity, and included talks, knowledge sharing and reflecting on the theme “weaving seeds of dreams”, with leaders from a wide range of fields, all of whom uphold respect for the Earth and the transmission of knowledge at the heart of their narratives.