On the occasion of my speech for the inauguration of Feminism, the women’s book fair, at the «International Women’s House«, I was made aware that this place is about to close and that the building’s lease has been revoked by the City of Rome.

In a few hundred years, the rule of patriarchal capitalism and the current extractive agricultural and industrial paradigm based on one-way exploitation of resources and wealth from nature have brought our planet to the brink of collapse. 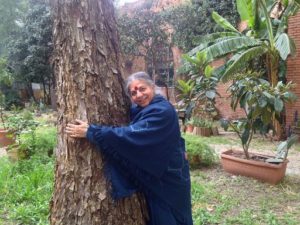 The recent climate report of the Intergovernmental Panel on Climate Change (IPCC) warned us that in just twelve years we may have already reached the temperature increase that the Paris Accord had predicted for 2100. And that it is imperative to take the necessary measures now, or we will have to face climate catastrophe. Furthermore, our food security and survival are based on the preservation of biodiversity, which is now threatened by what scientists call «the sixth mass extinction«.

The rise of the one-per cent, a minority of extremely wealthy and greedy men, who are about to control up to two-thirds of the world’s wealth by 2030, is characterised by an attack on all those cultures and knowledge based on sharing and caring, including conservation based production, which is at the base of circular solidarity economy.

Therefore I call on Mayor Raggi to not just protect, but enlarge the role of the International Women’s House, as a hub for future economies, future knowledges, future communities. It needs to be a hub where young people, especially young women, can find their way to build local living economies, where the garden can become a place, where anyone who wants to learn how to grow their own food – that’s fresh, local and poison-free – can come. This place should become a university of the future and therefore should not be shut down- On this International Women’s Day this is a commitment can the mayor can make to the future of Rome and the future of the planet.

With my warmest regards