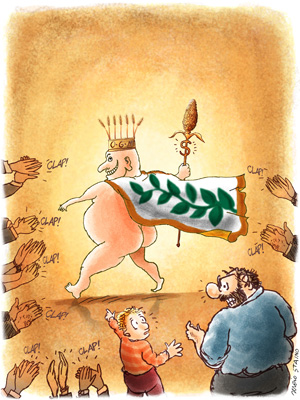 A Global Citizens Report on the State of GMOs – False Promises, Failed Technologies

People who point out the emptiness of the pretensions of powerful people and institutions are often compared to the child in Hans Christian Andersen’s fable who says that the emperor has no clothes.

The fable that GMOs are feeding the world has already led to large-scale destruction of biodiversity and farmers’ livelihoods. It is threatening the very basis of our freedom to know what we eat and to choose what we eat. Our biodiversity and our seed freedom are in peril. Our food freedom, food democracy and food sovereignty are at stake.

This report is a compilation of the many voices from around the globe speaking the truth about what is happening in their communities and countries and are exposing the illusion that genetically modified organisms (GMOs) are, as Wendell Berry writes, “the latest answer-to-everything”.

The GMO Emperor Has No Clothes OFFICIAL PRESS RELEASE

Seed Freedom
Publications of the International commission on the future of food and agriculture, Reports