On 13 April, Vandana Shiva joined with Don Ciotti in Turin in a conference on the ecological value of Pope Francis’ “Laudato si” encyclica. Dr Vandana Shiva commented on the distortions of the current economic system as follows: «When we say that we want to end poverty, then we must look into the systems that create poverty by robbing the poor of their livelihoods and of the common good. Before we can make poverty history, we must properly consider the history of poverty. The question is not how much rich nations can give, the question is how they can take less”.

Local organisations in Veneto had the opportunity to meet two world leaders in ecological thinking: Vandana Shiva and Salvatore Ceccarelli, respectively president and member of the board of directors of Navdanya International. «It is not true that you have to use pesticides to make a profit, you can make a profit even without pesticides – said Salvatore Ceccarelli . “This is demonstrated by the fact that there are so many companies, including wineries, that work with biodynamic techniques of cultivation and make significant returns”. During the conference at Pala 2?, which was attended by over 1500 people from all over Veneto and neighboring regions, Dr Vandana Shiva said that «we are immersed in a system of non-human development that steals from nature and humans and that is responsible for ecocide and genocide. But the health of the Earth and the health of People are one. Alternatives do exist and are based on the regeneration of soils through agroecology, the preservation of biodiversity, the promotion of short supply chain food systems. Each of us can reverse the current disastrous trend with our little big daily choices: we can change the world at every bite we eat, at every outfit we choose, at every trip, at every purchase. We must take back the right to save seeds and biodiversity, the right to healthy food and the right to protect the earth and its many species. We must stop the theft of corporations to the detriment of the poor and nature. Food democracy must be at the heart of the agenda for democracy and human rights, at the heart of the programme for ecological sustainability and social justice”.

Vandana Shiva declared: «Agriculture, we must not forget, is the culture of the soil and the land. And that is exactly what we’re destroying with poisons”. Other topics touched on by the president of Navdanya International were: the externalization of industrial agriculture costs and its economic and health consequences, the link between the climate crisis and the refugee crisis, the deficiency in nutrients found in industrial foods and, above all, the fact that poisons in the form of pesticides damage not only the planet – and therefore the climate – but all those of us, as well as other species, who have a right to a future on this earth. «I wish there were many Mals in the world,» said Vandana Shiva, «because Mals is not only fighting for its own sake but represents an important pioneering experience for the world at large”.

Commenting on the current economic system, Dr Vandana Shiva said that «Unlimited growth follows the model of the cancer cell, which does not know when to stop. In nature there is no unlimited growth», and in particular on the phenomenon of predatory globalization, she stated that «Water is a common good that belongs to people. Water cannot be manufactured, it can only be stolen – and this is precisely what Coca Cola and others do».

In addition to benefiting the economy, can agroecology succeed where conventional agriculture has failed, i.e. feed the world’s growing population? This is the issue which was discussed in Trento,  on April 12, on the occasion of the 10 years of activity of the association L’Ortazzo. In her speech at the Cooperation Hall, with an audience of some  500 people in attendance, Dr Vandana Shiva reminded us of a deadline that affects us all: «We have never had such a situation in the history of mankind, we know exactly what will happen in 100 years, but to change course, to avoid our own extinction we have only 10 years!”. Dr Vandana Shiva was asked what it is possible to do in practice, as simple citizens and local associations, to promote Earth Democracy. The activist’s response was: «We are the food we eat. Food that either destroys our health or nourishes us. I believe that the place where we return to take care of the land and reclaim our freedom is in the connection between food production and consumption. Even small local realities can trigger change: everything that lives starts in the small, the food starts with a seed that is very small. We have about 100 trillion bacteria in our gut, that work together to create everything we need. If we think of ourselves as a bacterium in the gut we understand that as a community we have real power”.

Will a change of cultural paradigm also be necessary to accomplish the transition? Vandana Shiva was interviewed by journalist Stefano Liberti during Poietika art festival, which took place on April 9 in Campobasso. During the meeting, Dr Shiva said: «In nature’s systems  there are no expensive and cheap foods. It is the trade system, run by corporations,  that has made this difference. And our diet has worsened because of this type of trade. No decent society should allow food for the rich and food for the poor. That’s what we have to change». 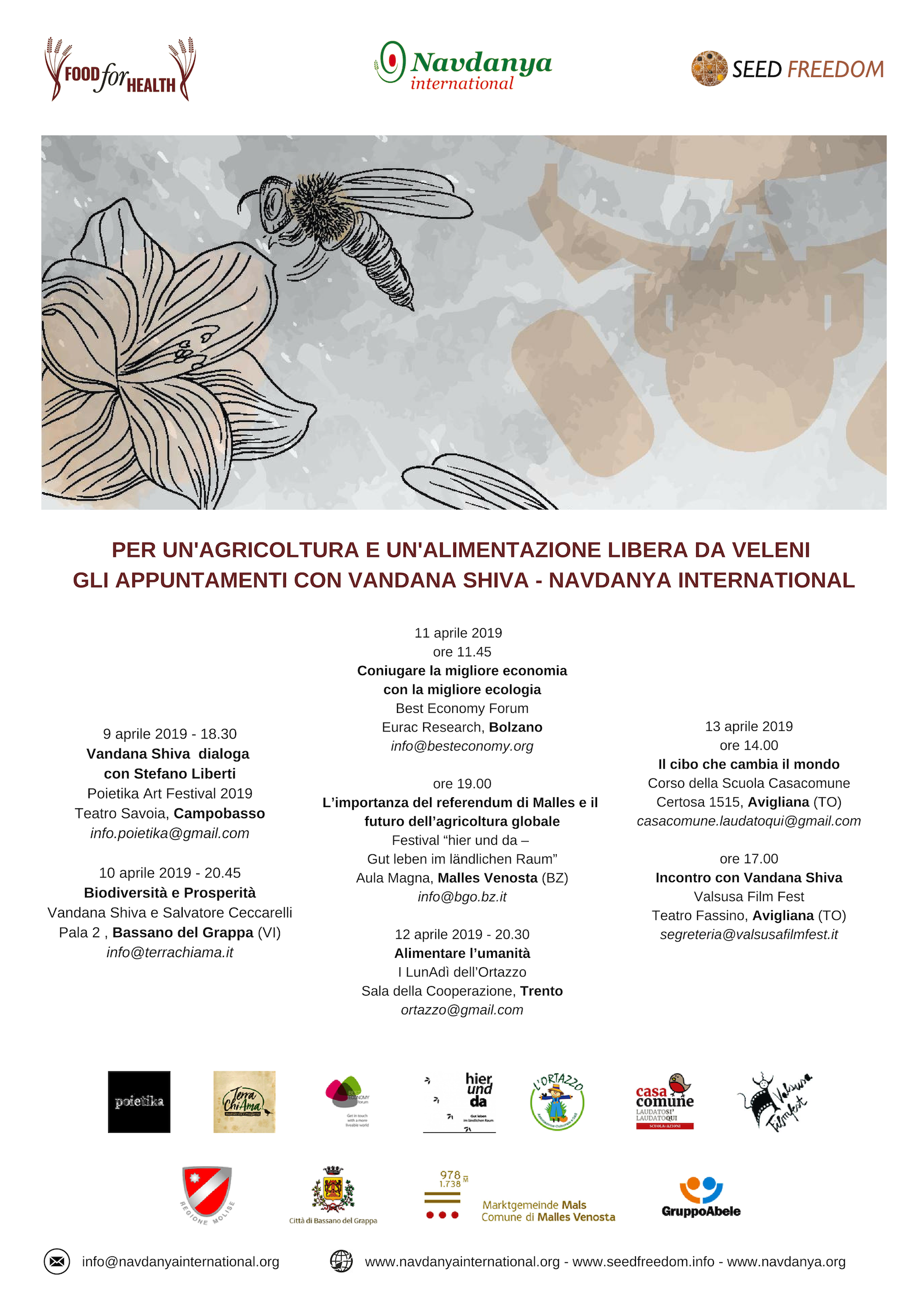