The Poison Cartel is Poisoning the World, Driving Species to Extinction, and Contributing to Hunger

The web of life is a food web woven by Pachamama through her self-organization, creativity, generative power and regeneration.

Food is nourishment. Good Food is Health. Food is the flow that embodies our relationship to the earth, materially, biologically, nutritionally, ecologically.

It is the connection between us, the earth, and other species. We are part of the web of life which is a food web. The food web weaves the web of life, in cooperation and mutuality. Food is the metabolism that connects humans with the earth, the country and the city, biodiversity and cultural diversity. Food can overcome the metabolic rift between humans and nature, individuals and community, the city and the country. Food can overcome the deep divisions and inequality in society. Food is a human right. Through food we can create just and sustainable communities and societies.

In the last few decades, corporate globalization based on deregulation of commerce has facilitated the spread an industrial food system. An Industrial globalized food system has become the most significant anthropocentric force, violating planetary boundaries, ecological limits, the integrity of species, cultures, communities.  A non-sustainable food system is also an unjust food system, violating the human right to food and health, life and livelihood.

Commodification of food and long-distance globalized supply chains controlled by a handful of corporations have ruptured the relationship between the countryside and the city, increasing the metabolic rift. This has contributed to climate change as a metabolic disorder of Gaia, a self-regulating living organism, and metabolic disorders for people resulting in the explosion on non-communicable chronic diseases.

We are facing an existential emergency.

The multiple life-threatening crises and pandemics we face today including the health pandemic, the hunger pandemic, the poverty and unemployment pandemic, the climate emergency, the extinction emergency, the emergency of injustice, exclusion and inequality, dispossession and disposability of large numbers of humanity are interconnected. The multiple   emergencies are rooted in a world view based on the illusions of separation and superiority, which deny interconnectedness and oneness, an economy of greed which puts profits above life.

All have their roots in the violation of the laws of Pachamama, violation of her planetary boundaries, her ecological limits, her biodiversity.

1 million species are threatened with extinction[1], with 200 going extinct every day[2]. The present path humanity is on is clearly non sustainable because it is destroying life on Earth.

Non sustainability and multiple emergencies which are destroying the very infrastructure of life is emerging as a threat of extinction to the very survival of the human species. Humans too are a threatened species.

By destroying the ecological web of life, the social web of community, and the ecology of our body, including the ecology of the gut microbiome, the industrial globalized food system is at the heart of the crisis of planetary health and the human health emergency.

75% of the planetary destruction – soil, water, biodiversity – is a result of globalized industrial agriculture. This commodity-based fossil fuel intensive, chemical intensive, capital intensive agriculture and food system has contributed 50% of the greenhouse gas emissions that are causing climate havoc and threatening agriculture -11-15% from Agricultural production, 15-18% from deforestation, 15-20% from processing and long-distance transport through global supply chains, 2-4% waste[3]. 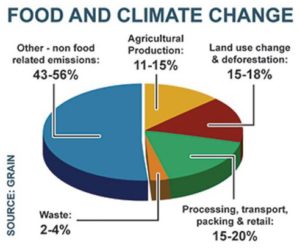 The atmosphere and biosphere are non-separable, the city and the country are interconnected systems of Gaia, the Living Earth connected through the nutrition cycles.

The destruction of the earth’s capacity to create, maintain and regenerate living processes that sustain life and the well-being for all is connected to the destruction of the human potential for food production and consumption through food systems that reduce our fossil carbon footprint while increasing biodiversity to grow healthy food everywhere, in cities and in the neighbouring countryside.

Industrial food systems have destroyed the biodiversity of the planet both through the spread of monocultures, and through the use of toxics and poisons which are killing bees, butterflies, insects and birds, leading to the sixth mass extinction.

Over 90% of crop diversity has been pushed to extinction through industrial agriculture[4].

Plant and animal species form the foundation of our food supply.

In spite of its vital importance for human survival, biodiversity is being lost at an alarming rate, as 200 species disappear daily with the spread of capital intensive, chemical intensive industrial agriculture. This poison-based, monoculture-based industrial agriculture is the biggest driver of species extinction – from birds and bees to forests (the Amazon), to soil organisms and vital biodiversity in our gut flora.  It is wiping out the diversity of crops we grew and ate. Humans ate more than 10,000 species of plants before industrial globalized agriculture[5].

Commodification of food has reduced the crops cultivated to a dozen globally traded commodities[6].

Industrial agriculture is producing nutritionally empty toxic ‘food’ commodities.  Not only do they lack in nutritional content, but they do not feed people.  The vast majority of corn and soya goes to biofuel and animal feed. This toxic industrial food system is contributing to hunger, malnutrition, epidemics and chronic disease.

Pandemics also have their roots in the limitless expansion into forests by agribusiness to grow commodities like GMO soya. Ebola, Zika, HIV, SARS, etc… are among the 300 new infectious diseases that have emerged in the last 3 decades as forest ecosystems have given way to large agribusiness agriculture like GMO soya in the Amazon and palm oil in Indonesia[8].

While ‘we feed the world’ is the rhetoric, industrial agriculture has pushed one billion people into permanent hunger, with half the hungry being farmers. A billion people are permanently hungry in this system, a crisis that has been deepened during the pandemic[9].

Small farmers who care for the Earth and our health through growing real food that nourishes us are going extinct.  Farming with poisonous chemicals means debt and displacement of peasants and small farmers, leading to the unprecedented epidemic of farmers’ deaths and suicides in India[10] and the refugee crises from Africa, Syria and other vulnerable countries[11].

Contrary to the myth that small farmers and their agroecological systems are unproductive and should be wiped out, and we should leave the future of our food in the hands of the Poison Cartel which increases agricultural productivity and food production, industrial agriculture produces only 20 % of the food we eat, using 75% of the land. In reality small farmers are providing 80% of the food we eat, using just 25% of the resources that go into agriculture[12] [13].

Not only does industrial agriculture use 75% of the land[14], it has destroyed 75% of the soil, water, biodiversity.

At this rate, if the share of industrial agriculture and industrial food in our diet is increased from 20% to 30%, we will have a dead planet, one with no life and no food.

On the other hand, the small ecological farms in cities and their foodshed that provide food today, can provide 100% of the food tomorrow by regenerating the soil biodiversity and water, the climate system, and public health.

And even as industrial agriculture brings the planet and our economies to collapse, corporations and billionaires are hijacking the food system by capturing the Food Summit. The Poison Cartel and Big Tech are joining hands to push the failed model on a fast forward, destroying democratic structures from local to global levels. The toxic future they are promoting is based on more chemicalisation and more GMOs, more mechanisation and driverless tractors, Digital Agriculture, surveillance drones, robots and spyware.

The health costs, social costs, energy costs, and climate costs of this system are unbearable for the earth, the farmers, and people. Just as the Green Revolution devastated Punjab in India and GMO BT Cotton pushed farmers to suicide in Maharashtra, these illusions will generate new ecological costs for nature and new social costs for society[15] [16].

A new fake accounting based on fake science is also promoting “net zero” as a fake climate solution – with the rich and powerful continuing to pollute and emit greenhouse gases, while they control the land that should be nourishing everyone with healthy food by reducing it to a to a “carbon sink”. Through new conditionalities and a global certification system, the polluters are trying to lock farmers and indigenous people into new “carbon trade” and “carbon farming”. We have called this “carbon slavery”. Fossil carbon is dead carbon and we need reduce fossil emissions to an absolute zero, not “net zero”. Plants are green living carbon that provide us with food and nourishment. Soils are living systems.  The billions of soil organisms produce all elements of the periodic table. For healthy food we need biodiversity, and foods rich in diverse phytochemicals that are necessary for the 100 trillion microbes in our gut microbiome. We need to grow more living green carbon as biodiverse  food. This is the food climate nexus. Regenerative organic farming has the potential to draw down 10 Gigatons of carbon per ha. In Navdanya we have increased soil carbon 100% over 20 years. Through Biodiversity we produce more nutrition by measuring ‘Health per Acre” not “yield per acre”. We can feed two times India’s population while regenerating biodiversity, soil, water and communities[17] [18].

Ecological agriculture and food production is Earth Care. This regenerative work on small farms and cities is the truly Green Economy. For this we need to ecologize food systems, and shift from the fossil fuel intensive, chemical intensive, capital intensive industrial agriculture model. We need to localize food systems, and shift from the unfair rules of corporate globalization which have destroyed our farms and food cultures and degenerated the health of the planet. We need to  create Gardens of Hope everywhere, stopping the poisoning of the earth and our  bodies, making a transition from degenerative, non-sustainable, unhealthy food systems to regenerative, sustainable, healthy food systems. Food can be the connector of the city with its surrounding small farms in a “food shed” that grows healthy, biodiverse, fresh food. Food communities are emerging as the basis for a new Food Democracy, an Earth Democracy.

We can Return to Earth, to Pachamama, in our minds, through our hearts, with our hands.

To cultivate a future that does not condemn us to the certainty of our own extinction.

By spreading seeds of freedom, growing gardens of hope, weaving garlands of love in times of unfreedom, hopelessness and hate, we create the possibility that humans and other species have a future.

Taking small steps to cultivate another future is in our hands. And when millions of heads, hearts and hands join in resonance, new possibilities are created.

The brute power that is destroying life on earth is the power of greed and violence.

We have other powers. Nature has powers. And when we align with nature’s powers, the impossible becomes possible, the certainty of collapse becomes the possibility of regenerating another path – the path to return to Earth as members of one Earth Family.

[15] Vandana Shiva, The Violence of the Green Revolution

[16] Research Foundation for Science, Technology and Ecology, Seeds of Suicide