Resistance against the use of pesticides in agriculture is spreading throughout Europe. The need to protect water, biodiversity and human health clashes with the interests of agrochemical companies. All over the world, farming communities are under threat as a result of a flawed agricultural and trading system. Since the end of last year, a broad civil society alliance has been collecting signatures for the protection of biodiversity and small-scale rural agriculture throughout Europe. On 21st January, Dr Vandana Shiva, president of Navdanya International, has officially declared her support for the European Citizens’ Initiative (ECI) «Save bees and farmers». The ECI aims to phase-out the use of all dangerous pesticides and help farmers to transition towards healthier and more environmentally friendly production methods. 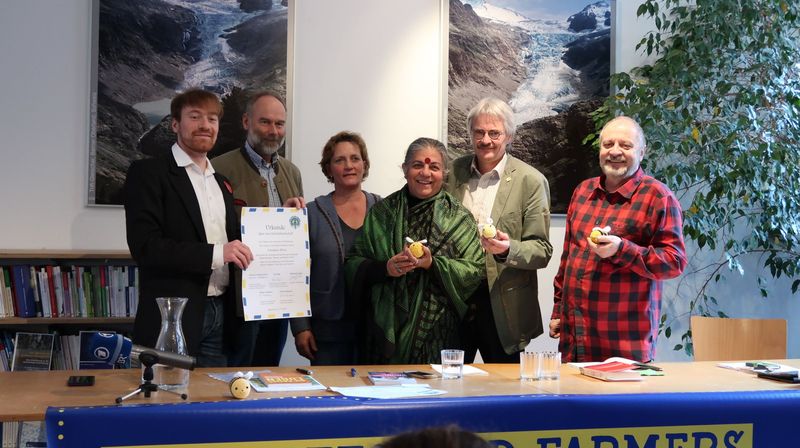 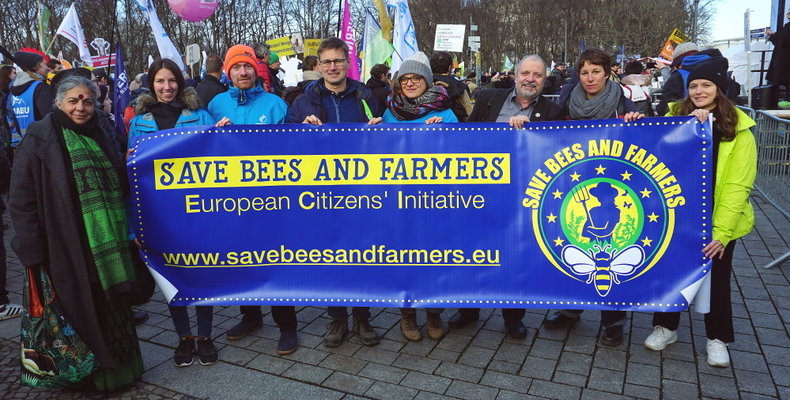 «The ECI must and will become a strong signal for the people of Europe: We want – no, we demand – a 100 percent pesticide-free Europe in a world that is free from toxic agricultural chemicals. If we don’t save bees and insects, farmers will be lost, because with this ECI, we are fighting also for generations to come. It is with great pleasure that I, as godmother, will play an active role for the ECI to become a wake-up call for politicians in Europe to finally be consistent and courageous”

«BUND Naturschutz is very pleased that Vandana Shiva, winner of the Bavarian Nature Conservation Medal, is accepting to be patron of the European Citizens’ Initiative. Vandana Shiva has given lectures and supported protests against genetic engineering in Bavaria for many years now, and thus made a decisive contribution towards the achievement of a GM-free Bavaria. She will once again make an important contribution towards a pesticide-free agriculture for future of our grandchildren».

«Human rights and food sovereignty are inextricably linked. Only an organic farming system can meet the challenges we are facing and must therefore be protected from corporate interests. It gives me great joy to be able to fight for peace and justice in the world alongside this brave woman”.

«Vandana Shiva is known as a critic of globalization. Her endorsement of the European Citizens’ Initiative makes it clear that it is not only the small farmers in India who are suffering the effects of globalisation. Even in highly developed Europe, and here in Bavaria, the so-called «Strukturwandel» (structural change) continues to destroy agricultural livelihoods. The Bavarian authorities predicted as early as 2017 – long before the referendum – that the number of farms would be further halved by 2030. This intense economic pressure on farmers is passed on to our ecosystems. Vandana Shiva is an inspiration and role model for us, because she has always considered the protection of farmers and nature as one entity and rightly questioned the system».

«We are delighted to have Vandana Shiva as godmother for the European Citizens’ Initiative to Save Bees and Farmers! In India, there is a federal state with six million farmers that is currently completely phasing out the use of agricultural poisons. In Europe, we are engaged in the same disputes over pesticides and yet we know nothing about them. With her inspiring personality and global recognition, Vandana Shiva bridges the communication hurdles between continents and makes the resistance against the agricultural industry stronger worldwide”.